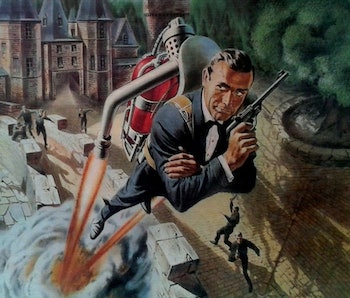 Jet packs have long occupied a niche in our cultural consciousness, and while companies like Boeing are still pursing the jetpack dream, they already exist in the culture’s most fantastic stories and have for decades now.

Never mind the fact that the belt wasn’t a sustainable mode of transportation due to its extremely limited fuel capacity, and the reality that this problem is the one encounter by anyone who attempted to manufacture and mass-market jet packs since.

It’s just so much fun to dream of a future where everyone can fly!

Here’s a quick rundown on some of the jet pack’s moments in the spotlight since they first captured the imaginations of science-fiction writers and futurists everywhere.

For many people, James Bond was and remains the epitome of cool, whether he’s being portrayed by Pierce Brosnan or Daniel Craig. But one of the most iconic iterations of Bond, if not the definitive portrayal, comes from Sean Connery, everyone’s favorite Scotsman with a lisp. In 1965’s Thunderball, Connery-as-Bond makes a speedy getaway via jet pack after murdering a SPECTRE operative in the operative’s chateau. It’s nice to see that Bond wears a helmet while using the jet pack, because even spies should know to put safety first.

Dan Stevens created this superhero in 1982, though his storylines take place in the late 30s. He first appeared in the now-defunct Pacific Comics’s Starslayer series as a man who found a jet pack and used the powers of flight such a device endowed him with to fight crime. Disney adapted the character’s story into a feature film in 1991, aptly titled The Rocketeer, that has since gained a cult following. The evocation of 1930s nostalgia, particularly through artwork, has also made the character a fan favorite.

In the special edition of Star Wars Episode IV: A New Hope, bounty hunter Boba Fett makes a brief appearance wearing - guess what - a jet pack. Though we don’t really get to see the pack in action until Episode VI, jet pack aficionados take heed. Unlike this scene, it’s always been there and it always will be.

Robert Rodriguez’s Spy Kids is a heady cocktail of kids saving the world, absurdist monsters, and pride in one’s Mexican-American heritage. It is an amazing movie, and it features an incredible jet pack chase sequence during which Carmen Cortez, one of the titular spy kids, evades thumb-shaped robots who also have jet packs. This thing was a trip and a half, right?

2003- We Were Promised Jetpacks forms

The name of this faintly angsty indie rock band echoes the way that many felt at the turn of the century: where the fuck are the jet packs?! Jet packs were held up as a metric for what the “future” would look like for so long that once that future, a new millennium, arrived sans jet pack it was understandable that people were disappointed, confused, or just plain pissed off. Does the music of We Were Promised Jetpacks encapsulate this bitterness? Not really, but that’s okay. It would be hard to lean on one Scottish band to define a multigenerational ache. 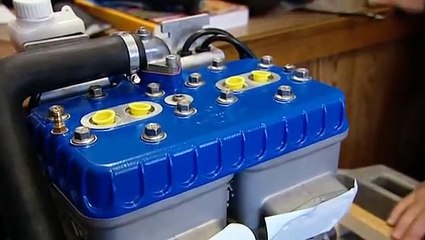 In 2005, the Mythbusters team tackled the rumor that a functional jet pack could be assembled from online instructions. This may seem obvious to the layperson, as a truly successful jet pack had never been constructed prior to this point. But to call such a conclusion obvious is to vastly underestimate the hubris of someone who is searching for jet pack assembly instructions online. The online jet pack instructions did not end up panning out. The resulting jet pack was unable to lift anyone into the air, and another myth bit the dust.

This local news gem made the rounds online in 2011 and has been a gift that keeps on giving ever since. “And it starts right now,” the jet pack wearer, identified as “John,” says moments before his jet pack betrays him on live television. At least the guy seems like he’s having a good time? This is also the year that smartphone game Jetpack Joyride hit the app store, so this was a pretty big year for jet packs.

Although this is technically a flyboard competition video, it’s sad to think that this is where we are in terms of the modern jet pack discourse. But the technology has basically become the purview of rich weirdos or bros with GoPros who edit Kygo beats over footage of them shooting around on their hydro-powered devices.

Will jet packs ever receive an image makeover, or are they irrevocably trapped in the arena of Online Fodder? That all depends on if a feasible, functional jet pack ever actually enters the marketplace. Until then, we’ll just have to keep looking forward to a future where everyone can fly around in the sky relatively unprotected… the future that we all want.