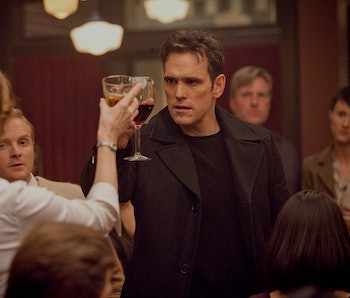 The Burkes are finally, finally attempting to assimilate into their new home, but their journey created an incredibly boring hour of television.

Within Wayward Pines there’s an ecosystem that moves fiercely with or without participation. It’s all right if you’re not cool with, say, performing a live execution in front of a mob. You’ll just be taken out, too, and replaced with someone who will. It’s a ruthless river that Ethan couldn’t swim against for three episodes, but this week he finally went along. With gritted teeth.

Sheriff Burke. That actually sounds nice. Yes, this week Ethan was assigned (read that again: assigned) employment, and it was Pope’s old post. Of which he was given mere moments after shooting his predecessor dead near the fence. I’m ashamed to say I didn’t see this coming, but that’s because I had hoped Ethan vs. Pope would be a bigger showdown.

Employment is assigned. It’s the inspiration to this week’s episode title, where roles are given and someone above expects you to play. But the kicker is that their previous lives, despite that Pines citizens are never to talk about it, informs them of their new careers but to the advantage of the town’s forces. Burke’s Secret Service background made him an exemplary candidate for sheriff while a former hypnotherapist makes her Pines’ best teacher (more on her later).

His employment is like a taunt. It’s a dare: Just try to stop us now. But who’s “us”? Whoever is pulling the strings of Wayward Pines, be it the government or aliens or mole people or whoever built this place, can almost be heard sneering as the townsfolk now look on Ethan’s new authority. It now puts Ethan in a position that compromises him: He’s now forced to do things he doesn’t want to do, and for the good of his family he’ll do them.

Of course, it doesn’t come to that. It’s a direction that strangely lives up to Wayward Pines’ original thesis of sidestepping expectations, a game plan demonstrated since the pilot. But Ethan struggling to off the town’s newest target at the execution - the “Reckoning” - would have at least been a choice opportunity for breathtaking photography or a moment of crisis. Instead, Burke kind of gets off easy.

Peter McCaul, a family man who found himself in Wayward Pines against his will and has been a nuisance ever since (or however long it took him to get “three strikes” against him). His third strike, a Banksy: a spray painted “propaganda” urging citizens to acknowledge “the truth,” and it put him in close proximity to the new Sheriff Burke. But while the execution Pam so desperately wanted doesn’t happen, Peter orchestrates his death at the fences as if Ethan did it. There are cameras everywhere, Ethan tells his wife in the beginning. They’re always being watched. Peter knew this too and manipulated his suicide to look like Ethan’s doing.

Pam will want to know what Ethan did to Peter, because Wayward Pines has rules that have to be followed. They made that much clear to Ethan.

A clearer picture of the town is beginning to form, as it should. We knew enough that everyone was aware of their imprisonment - which, going by next week’s promo, a few are willing to actually describe it as such - but now we know for sure not all are content.

We also know that time is a wild beast subject to change with each person. Pete was lured into Wayward by a beautiful, younger Pam who aged to her regular self after bringing him to the town. It’s been approximately four years since for Pete while poor Beverly had close to fourteen. For Kate, it’s been twelve. And it doesn’t matter to Pam. Does the town feed off energy from their time spent as prisoners? That would be very a Doctor Who thing to do.

This week Wayward Pines introduced Mayor Fisher, an unassuming figure who looks like all of your friends’ dads blended together. His blandness makes his wife, Maggie, a former hypnotherapist assigned to be a school teacher and has turned the youngest Burke into her project, stand out. She may even be more in control than he is. In the first few weeks it looked like ex-Sheriff Pope was the only authority Wayward Pines had besides its ethereal forces (Can I guess aliens? Let’s bet it’s aliens.), but that couldn’t have been possible. Even a fake town needs a resemblance of a larger government and a facade of order. Pope and his ice cream couldn’t be the only authority.

In a very underwhelming subplot, Ben has begun school. Of course it’s a creepy, uniformed academy, of course there are eerie but unexplained imagery, but like everything else in Wayward Pines it looks normal from afar. The program described by Maggie sounds a little too good to be true (and noticeably weak in its actual academics), but it’s still basically a high school. Maggie’s evaluation of Ben read more like manipulation - natural, given her previous life as a hypnotherapist - and it’s a safe bet Maggie may be pulling more strings in Pines than it appears. It was said that the key to Wayward Pines are in its children. These aliens/evil government/Knights Templars(?) wouldn’t let their secret to success go in the hands of just anyone.

But don’t let any of this pique your interest too much. While few, crucial developments are happening on Wayward Pines, but this week was a giant misstep in excitement. Subpar photography (except maybe when the Burkes meet Jenkins, which looked atmospheric enough), awkward pacing, and just mediocre directing made this week’s Wayward Pines a bit of a snooze. A cheat sheet summarizing what was new would have sufficed in place of an hour where things are happening but it doesn’t feel like it.