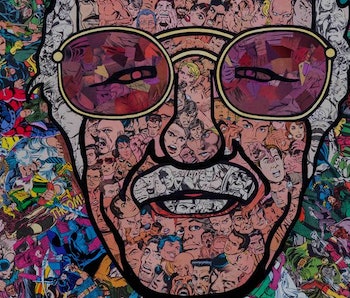 Sure, the upcoming Avengers: Infinity War is going to feature 67 characters, but there are way more Marvel heroes out saving the world. Problem is, Marvel Studios doesn’t have the film rights to the X-Men or the Fantastic Four, so they can’t join the MCU. But, Stan Lee says that will change, eventually.

The Generalissimo was at Wizard World Comic Con in Nashville over the weekend, and he shared his optimistic view about the prospects of Marvel getting the film rights to some of its most famous heroes back from 20th Century Fox.

“Sooner or later, they’re going to get the rights back to all our characters,” Lee explained, according to Comic Book. “They’re working on it, and they’re still making X-Men movies and stuff. Don’t worry about it. You’ll get more Marvel superheroes than you’ll have time to look at in the next few years.”

It’s arguable that there are already more Marvel superheroes than the casual fan has time to look at, but the rest of Lee’s prediction doesn’t appear to be based on any firm information. It’s just a feeling that the X-Men and Fantastic Four’s return to the Marvel fold is an eventuality. A similar thing happened with Spider-Man, whose film rights Sony still owns. The studio cut a deal with Marvel to allow the web-slinger to appear in Captain America: Civil War and Spider-Man: Homecoming.

While the latest Fantastic Four film adaptation was a train wreck, Fox’s X-Men offerings, including Deadpool and Logan, have been doing very well. There’s less of an incentive for Fox to team up with Marvel than there was with Sony, whose Amazing Spider-Man films weren’t doing great.

For what it’s worth, Hugh Jackman said he’d only return to play Wolverine if he got to join the Avengers. So, here’s hoping Lee’s right.