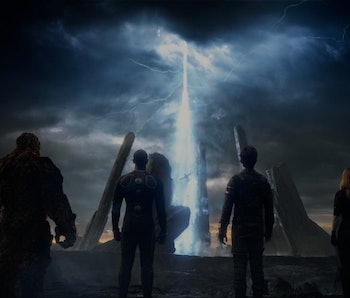 I’m going to let you in on a dirty secret: I liked the two Fantastic Four movies.

The 2005 Fantastic Four and to a lesser extent 2007’s Fantastic Four: Rise of the Silver Surfer were amusing, harmless flicks with an affability that only now big comic book movies are embracing again. A full seven years before Guardians of the Galaxy showed off a maniacal raccoon, a cocky pretty boy sold sponsor space on his superhero costume. It was funny. These goofy weirdos are supposed to be funny.

But what will the new The Fantastic Four be? It looks anything but funny. Or fun.

Josh Trank, who previously helmed the thematically similar Chronicle, has overlooked Fox’s reboot of their superhero property and it all feels like a misstep. Beyond that it was made purely to satisfy contractual obligations to maintain series rights, it seems to miss the point of the Fantastic Four entirely. It feels dated.

I acknowledge that the movie isn’t out yet. Rumors of a plagued production are troubling, but all that matters is what’s on screen. But still.

A cohesive universe that spanned multiple movies and TV shows wasn't fathomable before Iron Man. Who the hell had the attention for all of that? No one, so Marvel threw their characters out to other movie studios like paint to a wall in an art project just to see what would stick. Spider-Man stuck (he kind of has to, he’s Spider-Man). Elektra didn’t. On went the wheel.

Cultural domination was more of a cool consequence that could happen as a result of their movies. It wasn't actually part of the plan.

Fantastic Four under 20th Century Fox was met with… success? It performed very well at the box office but everyone hated it. (Except me.) It wasn’t Batman and Robin bad, but it was a cheesefest when fans were hungry for meat. Christopher Nolan’s Batman Begins released that same year was grade-A kobe beef.

Following the last Fanastic Four movie came years of more meat. These movies took superheroes to thematic highs by taking them down the gutter, confronting them with questions about security, surveillance, and vigilantism.

They were still dudes in cool costumes punching other dudes, but they bothered to stop every so often and think for a little bit.

But running simultaneously against this trend was an opposite a: In 2008, Marvel took charge of their own destiny and unleashed Iron Man.

Marvel maintained creative control of Iron Man, unlike before where they signed off and basically gave Fox an “X-Men For Dummies” guide. This success began Marvel's current multi-hit combo that most recently landed with Avengers: Age of Ultron doing $900 million worldwide

These movies started a new tone people dug: heavy emotions, light humor, and eternal optimism. No, things are not always gee golly great (Captain America: The Winter Soldier), but you and your friends can still chill.

This optimism changed audience’s taste buds. In 2013, Warner Bros. released the thematically dark and also literally dark Man of Steel. Besides pacing, direction, and plot, its pessimism was panned. It didn’t make sense to that the world's boy scout who inspired generations to believe in a better tomorrow was a total Debbie Downer. And for some reason, instead of lightening up the upcoming Batman v. Superman turns this darkness up to 11.

So what will The Fantastic Four be?

There are fun moments in the trailer (and some of it awkward) but there’s an overwhelming dread undercut throughout. The trailer begins with pressure; a boardroom of supremely wealthy investors challenging an innocent, friendly-looking old man about their money. Thumping, dark percussions pulse like a heartbeat, and The Thing looks far more monstrous and devoid of color than he was a decade ago.

But maybe that’s a good thing.

It’s admirable to shift paradigms. Filmmaker Joseph Kahn did it just this year. Characters who remain stagnant in one kind of image in the consciousness for too long can render them boring, and it’s also a creative challenge: Why not change things up?

Christopher Nolan asked “Why not?” when he changed how pop culture thought of Batman: the terrible Batman and Robin was the last image of Batman before Nolan showed off Batman Begins and The Dark Knight. And that was a repeat of history, since Tim Burton had changed the Caped Crusader in the same way when everyone remembered this as Batman.

So why not Fantastic Four? Nothing makes them particularly immune to change.

This isn’t to condemn Trank’s movie before release. It’s actually admirable that he had the confidence to take silly characters and bring them somewhere they may not belong.

But the dark sci-fi aesthetic Trank has painted the Fantastic Four with is just exhausting and dated. Dark superheroes aren't in vogue anymore. After The Dark Knight Returns, it's time heroes lightened up. Darkening superheroes who have a giant, cerulean “4” on their spandex is a little try-hard. That Trank cited David Cronenberg and The Fly as key inspirations for his vision is eyebrow-raising.