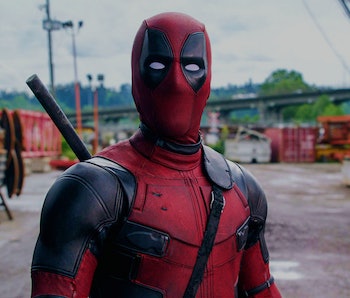 Deadpool is trying to help those affected by Harvey and Irma by doing what he does best: mouthing-off.

On Saturday, Reynolds took to Twitter to offer ways everyone can provide aid in the aftermath of Harvey and Irma, in a very Deadpool —or Reynolds — fashion. “Let’s help Hurricanes Harvey and Irma to fuck off,” Reynolds wrote. “Support Americares.org or charity of your choice: charitynavigator.org.”

In the photo, the actor’s wearing a shirt saying “Hope. Heal. Rebuild,” which you can purchase to support Americares relief efforts. However, in an Instagram post on Sunday, Reynolds said you can always “Skip the fucking t-shirts altogether” and donate directly through the sites mentioned above.

Through Charity Navigator, you can find pages for charities offering assistance specifically to those affected by Hurricane Harvey and Irma. The site also gives ratings and reviews of charities to give you a better idea of how directly your money will be used to help those in need.

Hurricane Harvey may have dissipated, but affected communities now need help to rebuild, with many areas still flooded, in addition to other pressing issues like disease because of contaminants in the floodwaters. Meanwhile, though Irma was downgraded from a hurricane to a tropical storm on Monday, it continues to hit cities in Northeast Florida with 70 mph winds, while previously it was lashing on Florida and Georgia with winds up to 142 mph. To give you a better sense of the scale of these storms, the total damage from Irma and Harvey is expected to cost the US economy $290 billion.

Deadpool 2 had supposedly wrapped shooting, but it looks like Reynolds is on set in the image, which probably just means reshoots are being done. If that’s the case, or perhaps especially if it isn’t, it’s nice to see Reynolds taking the time to try to help those in need.