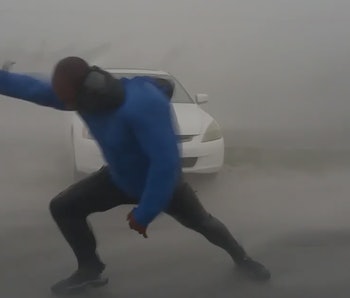 Early Sunday morning, as the full force of Hurricane Irma began to touch down upon Florida, two risk-taking meteorologists were out in the Saddlebunch Keys east of Key West, testing wind its speed.

Brewer took a video of his colleague, Juston Drake, holding up a wind gauge and attempting to stand up while the wind whipped around him. After being posted Sunday morning, the video quickly went viral — which makes sense because it’s crazy.

Drake is clearly just barely managing to stand, as horizontal winds push him backwards, knocking off his googles.

A self-defined storm chaser, Drake is based in Moore, Oklahoma and is a contributor to the site, Stormgasm. The site is manned by a group of meteorologists (including Brewer) who track and publish photos and videos of extreme weather events. Drake has a degree in meteorology from the University of Oklahoma, and has been featured on two storm chaser shows on the Weather Channel, Tornado Road and Storm Riders.

The Saddlebunch Keys are a series of mangrove islands about seven miles east of Key West. As a Category 4 hurricane, Irma is the strongest hurricane to hit the Keys since 1960. It’s a highly dangerous weather situation and all residents have been strongly urged to evacuate.

By Saturday afternoon Irma had come ashore again, this time as a Category 3 in Marco Island, and is expected to move up the Florida west coast Sunday evening and into Monday.