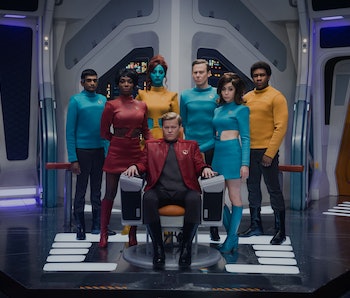 The essential truth about Black Mirror is that it has the unique ability to run pretty much the entire range of what science fiction can offer. Two new images for the upcoming fourth season of Black Mirror hardly look like they come from the same show. Is this Star Trek? Or soft cyberpunk?

On Thursday Netflix released two episodic images from two different upcoming stories on Black Mirror. The first image is from “USS Callister”, which looks to be a more legit Star Trek tribute than either The Orville or the next real Trek series, Discovery. There are goofy color-coded outfits, blue aliens, and people wearing mini-skirts in space for no reason whatsoever.

And then…there’s an image from the episode titled “Arkangel.” A young girl is getting some kind of brain-implant as her mother looks on. Is this domestic cyberpunk for the 21st century? Maybe. It’s a hyper-realistic image that almost seems like it’s not sci-fi. This represents the kind hyperbolic naturalism Black Mirror is so good at. With past episodes like “Nosedive,” the show paints a picture of a future world that is utterly plausible. But, in last year’s “San Junipero” the show dropped audiences straight into a phony 1980s simulation without much explanation.

This isn’t to say “USS Callister” and “Arkangel” will be the “San Junipero” and “Nosedive” of the new Black Mirror season. If anything, the episodes of Black Mirror are always a little too complex to repeat premises outright. Instead, for now, these images just remind us that the greatness of Black Mirror almost certainly rests in not being able to judge it at all by a few photos. And yet, those few photos want sci-fi fans to know even more what these stories are about.

Black Mirror season 4 is coming to Netflix sometime this Fall.