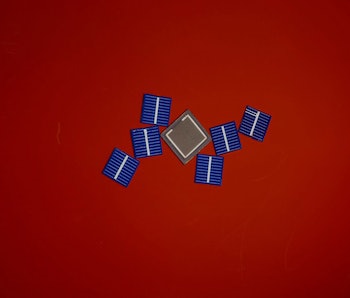 Not everyone will be able to get a solar roof, especially not right away. While the tax credits and long-term energy savings for a Tesla solar roof are substantial, the initial price tag could easily be north of $50,000, and even those ready and willing to make the switch for their home or business might find it’s just not possible.

So Stranks and his team — researchers from Cambridge, MIT, Oxford, Bath and Delft universities — may be on the verge of a powerful new solution for solar energy, as they detail in research published Wednesday in the first issue of the journal Joule.

Instead of making photovoltaic cells out of the relatively hefty and expensive material silicon, they aim to use a special kind of mineral called perovskite. This plentiful, lightweight material would open up all new possibilities of powering people’s homes with solar. And it’d be as easy as covering your roof with a tarp.

“We can think about rolling out a solar tarp on the roof, instead of having a quite rigid heavy panels that you have to install in a more expensive fashion,” he says. “You can really bring down a lot of the costs. So installation costs, for example, and also the capital costs for actually making the panels.”

The idea of using perovskites isn’t new, but the problem had been that tiny imperfections in the mineral’s crystal structure would trap electrons before their energy could be tapped. Stranks and his team successfully tested a treatment that uses just the right combination of light and humidity during the manufacturing process to “heal” the material, getting it ready for potentially years of trouble-free, ultra-efficient use.

“The long-term vision is really to bring down solar to very very low prices, make it accessible for everyone and really provide the utility-scale power,” says Stranks. “It would bring it down to a price where it really does change how we think about using power and how we power our houses. It’s of course a longer-term vision because these things take time to really come down in price.”

“The bar is set very high with the panels that are on roofs now,” says Stranks. “Thirty years is the guarantee, so that means in many ways we’re aiming for that. And the hope is we will reach that, there’s a lot of work that still needs to be done to get there, but I think I’m very confident that we can get there with more work on these materials.”

The researchers have tested the treated perovskite cells over a few months, and Stranks says the initial results are promising. Testing the long-term stability and resiliency of these cells will obviously take more time, but simulations of accelerated weathering should give us a better idea of how close we are.

The treatment itself is straightforward enough to be scalable to actual production of perovskite cells, says Stranks, since it’s just a question of exposing the half-made cells to light and humidity.