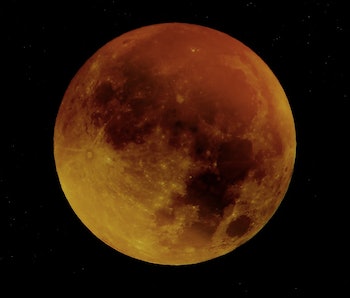 There’s a lot of unusual stuff going on around tonight’s full moon. First, it will rise to appear situated in the constellation of Aquarius. Second, and it will find its trajectory passing near Neptune as the blue planet will have been sitting in opposition on Tuesday evening; the point at which the planet will have appeared brightest in our sky.

To see the full moon and Neptune at the same time, you’ll need to have a telescope, or at least binoculars, because far-away Neptune isn’t visible to the naked eye. According to Space.com, the moon and Neptune will pass within 0.73 degrees of each other around 1 a.m. Eastern on Wednesday, with Neptune hanging out just to the northwest of the moon.

The moon will be officially full at 3 a.m. Eastern Wednesday, so plan to stay up late tonight.

As the Corn Moon, or alternately the Barley Moon, early September’s moon name reflects the crops that were ready for harvest around this time. It’s also known as the Falling Leaves Moon and the Nut Moon.

If you’re interested in this article, check out this video on the planets orbiting Trappist-1.