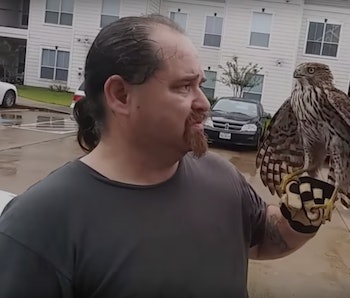 On Sunday, Hurricane Harvey, later classified as a tropical storm, pounded Houston, Texas with torrential rain with a ferocity our country has never seen. Many vulnerable populations, including Houston’s working class and those living below the poverty level, were unable to evacuate in time, leaving them in mortal danger for days. Humans, however, were not the only victims of the storm.

Perhaps the most famous animal survivor of Hurricane Harvey is a hawk who flew into a Houston man’s taxi cab while he was out shopping before the storm arrived. The man, William Bruso, returned to his car after making a supply run and was surprised to find a distressed looking hawk chilling in his passenger seat. He filmed the hawk, whom he named Harvey after the storm, and asked his YouTube followers if anyone knew what he was supposed to do with him. No one had any idea, so Bruso filmed himself taking Harvey home.

Several YouTube comments on Bruso’s channel pointed out that Harvey may have sensed the barometric pressure changing in the air pre-storm, and that he may have just taken his chances by asking a human to shelter him. When Bruso tried to gently shoot Harvey away, the hawk simply refused to leave. Bruso pulled out of the parking lot, filming his first update video, and Harvey politely rode home with him.

When Bruso arrived home, he and his friends attempted to shoo Harvey away again, though the hawk simply perched on the passenger door and stared at them, as if to say, “No way, can’t you feel the wind picking up?” In the video below, Bruso kindly repeats, “Harvey, you gotta go, buddy, seriously,” and Harvey turns to the camera looking like an animal version of Jim from The Office.

You can watch all of Harvey’s Big Day play out in Bruso’s vlogs, including an update video where Bruso reveals he’s keeping Harvey occupied with a dish of water and a couple chicken hearts. Bruso’s confederate flag makes an appearance in the videos, which is a bummer, but Harvey is the real star of the videos and he, being a hawk, doesn’t go into his politics while Bruso tapes him. He seems content to just chill in Bruso’s living room and eat the hearts of smaller birds.

Eventually, once the brunt of the storm passed, Bruso contacted the Texas Wildlife Rehab Coalition to pick up Harvey, whom Bruso apparently upgraded to Sgt Harvey Hawk off-camera. You can watch a woman named Ivory Rose scoop Harvey up and ferry him off to a safe place in Bruso’s final Harvey video.

Over at TWRC’s YouTube channel, Harvey continues his vlogging adventures. The wildlife experts were able to determine that Harvey was injured, which prevented him from flying away — that explains why he was so content to chill at Bruso’s house among hundreds of bottles of booze.

If you wish to help TWRC pick up animals like Harvey, who were displaced or injured by Hurricane Harvey in Houston, you can donate money on their website and ensure that Houston’s hawks all have full bellies.