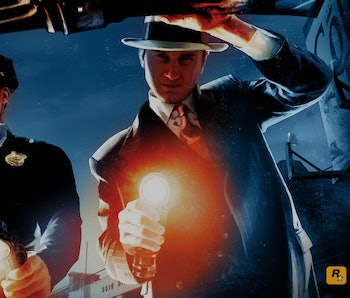 Video games are capable of creating immersive worlds that only the most skilled filmmakers and novel writers can hope to accomplish — centuries of human history is ripe with further material.

Although creative liberties and technical limits are inevitable, here are twelve great games that are almost as good as a time machine. Almost.

Nobody forgets their first case of dysentery. Although probably the least immersive experience compared to the rest of the list, Oregon Trail set the standard for historical video games to come.

The Assassin’s Creed games let you control a killer that knows parkour against a historical setting backdropped like a theme park attraction. From ancient Jerusalem to colonial Boston to the upcoming Assassin’s Creed: Syndicate set in Victorian England, you’re caught in a centuries-long conspiracy where you just so happen to bump into the likes of da Vinci or Ben Franklin.

Although it’s set in the future, it’s a future where the free-lovin’ rebellion of the 1960s never happened and the world stayed in the space-age optimism of the 1950s… and dived right into a nuclear apocalypse. It might be a far future yet to be, but the world and design of Fallout is a walk through a dark yesteryear that could have been.

This isn’t the only Call of Duty game on this list. While the series is now reaching future sci-fi territory, early in its lifespan they were incredibly immersive World War II first-person shooters. Call of Duty 2 was a stand-out game for the then-new Xbox 360 and its classy presentation, expert sound design, and impressive graphics made it the video game world’s Saving Private Ryan.

It’s impossible to even make sense of the story, but this real-time strategy game is set against an alternate World War II where Albert Einstein was killed by the Russians and the United States are against them and a super powerful Japanese empire. And critics got a kick out of it.

Yet another alternate World War II where this time, it didn't happen. Because of aliens.

An advanced alien species known as the Chrimera show up, and the Americans and British team up like gangbusters. What would the Ken Burns documentary look like? Pretty cool, probably.

At first glance Call of Duty: Black Ops is just a slick first-person shooter game. The core story is a campaign set during the Cold War with some “flashback” missions to World War II. Cool.

And then there’s an entirely separate story about zombies. Because of course it does. But it’s about Nazi Zombies. And it has JFK. And Fidel Castro. And Robert McNamara. And at some point the developers of Treyarch got super high and created an expansion pack where you can play as Sarah Michelle Gellar, Danny Trejo, Michael Rooker, or Robert Englund against a horde of zombies.

If you hadn’t noticed, for some reason during the 2000s video games were obsessed with World War II. But unlike most WWII games, “The Saboteur” had players rely on stealth and espionage to topple the German grip on occupied France. The game had one standout feature: In areas of German control, the game would be in black-and-white. As their grip loosened, the liberated areas would slowly turn colorful.

Very few video games take place in the wild west, let alone create an immersive experience that makes you feel like a real outlaw. Rockstar Games’ Red Dead Redemption did so with flying colors. It was basically a Grand Theft Auto western and was met with critical acclaim.

In an alternate 1930s the United States split into different sovereignties. The constantly-warring territories never develop the interstate highway, so people took to the skies for transport. Gamers take control of the ace “sky pirate” Nathan Zachary, a retro Han Solo who embarks on a crusade to avenge his friend’s murder.

The game was praised for its excellent presentation and controls, but it became a cult-hit when it was bundled as a free game for new Xbox Live subscribers.

Who would have thought that playing a maid for a wealthy dictator could make for one of the most captivating experiences ever in a video game?

Set in a fictional Latin America country in the 1970’s, Sunset is a stylish point-and-click adventure painted with a lush magic hour sun. While the country outside plunges into chaos, you maintain spick-and-span order and carry out mundane chores but stumble upon instances that may or may not build a relationship — however tumultuous — with your physically absent, spiritually present dictator boss.

Rockstar could have taken advantage of creative liberties and put players into positions where they can change or experience history, but L.A. Noire is decidedly muted.

Rather than a bombastic, epic war movie, the game is akin to a stylish, post-war noir novel. The only war fought in the game is the never-ending war against crime as you play a detective on a quest for justice in a lavishly recreated 1940’s Los Angeles.