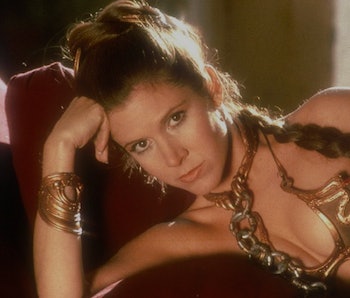 On Thursday, a federal judge from the Ninth Circuit Court of Appeals in San Francisco ruled that conservative streaming service VidAngel is not allowed to stream a version of Return of the Jedi that excludes the metal bikini, because “Star Wars is still Star Wars, even without Princess Leia’s bikini scene.”

VidAngel is a unique streaming service. They attempt to give conservative families censored versions of Hollywood hits, minus swearing or sex. But the problem is, they aren’t exactly paying for the movies to begin with. Their justification for doing this partially rests on the Family Home Movie Act: a piece of legislation that allows for the creation of “clean” films.

When Inverse investigated the three Mormon brothers who created VidAngel — Neal, Daniel, and Jeff Harmon — back in March, they strongly asserted their belief that they would win their various court cases: “We are aggressively defending ourselves on the Ninth Circuit level, seeking a legislative clarification in Congress, and launching VidAngel Studios content as well,” they said.

But, as of now, it looks like VidAngel isn’t winning on the legal front. As pointed out by Ars Technica, any loopholes VidAngel was trying to exploit don’t work because they didn’t have the right to stream the content legally — altered or not — in the first place.

It is unclear at this time how this ruling will impact the rest of VidAngel’s movies, including a version of Guardians of the Galaxy without profanity.