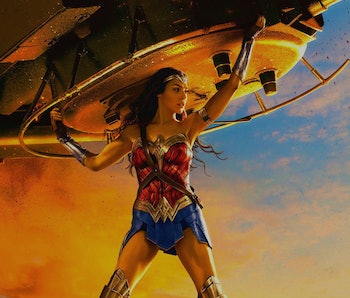 According to famed director James Cameron, Wonder Woman is “a step backwards” for women, and the character is “an objectified icon.” According to Patty Jenkins, the director of the hit DC film, Cameron has no idea what he’s talking about.

On Thursday, The Guardian published an interview with Cameron that included his unpopular take on Wonder Woman: “All of the self-congratulatory back-patting Hollywood’s been doing over Wonder Woman has been so misguided,” Cameron said. “She’s an objectified icon, and it’s just male Hollywood doing the same old thing! I’m not saying I didn’t like the movie but, to me, it’s a step backwards.”

He then went on to unfavorably compare Wonder Woman to a character from his *Terminatorfilms, Sarah Connor. According to Cameron, “Sarah Connor was not a beauty icon” like Wonder Woman. “She was strong, she was troubled, she was a terrible mother, and she earned the respect of the audience through pure grit,” he said. “And to me, [the benefit of characters like Sarah] is so obvious. I mean, half the audience is female!”

In a tweet later that Thursday, Jenkins responded to Cameron’s misguided take on her film with a screenshot of text. “James Cameron’s inability to understand what Wonder Woman is, or stands for, to women all over the world is unsurprising as, though he is a great filmmaker, he is not a woman,” the director wrote. She then shut down his belief that women are only strong when they’re “hard, tough and troubled” rather than “attractive and loving.” As she put it, “There is no right and wrong kind of powerful woman. And the massive female audience who made the film the hit it is, can surely choose and judge their own icons of progress.”

Beyond the wildly inaccurate belief that attractive women can’t be strong characters, too, Cameron’s criticism was rather strange given what takes place in Wonder Woman. The titular character leaves her family and friends to fight a war for a world where women aren’t respected, using a sword and shield in said war to turn the tide of battle. What kind of “objectified icon” does that?

The Terminator director’s comments, naturally, set the internet ablaze, with some being quick to call out the hypocrisy of his comments. The Daily Dot pointed to an interview with Playboy, where the director admitted to violating the science of Avatar to give Neytiri (played by Zoe Saldana) boobs. “Right from the beginning I said, “She’s got to have tits,” even though that makes no sense because her race, the Na’vi, aren’t placental mammals,” he said.

Maybe when the next female-focused superhero film comes out, Cameron will decide to keep his mouth shut.

More like this
Culture
5.9.2022 1:30 PM
Exclusive: 'Everything Everywhere All At Once' comic opens up the multiverse
By Isaac Feldberg
Entertainment
5.8.2022 10:00 AM
Doctor Strange 2 fails its female leads in two crucial ways
By Mónica Marie Zorrilla
Entertainment
22 hours ago
Frog-Man? She-Hulk’s obscure Marvel comics hero, explained
By Alex Welch
Share: