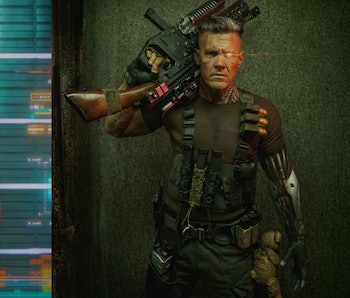 By the time Avengers 4 comes out, Drax actor Dave Bautista somehow hopes to be bigger than he already is, thanks to Cable actor Josh Brolin.

Speaking to The Hollywood Reporter’s Heat Vision, Bautista talked about Brolin’s physical transformation for the role of Cable in Deadpool 2, and how it has motivated him in the gym. “I am known for being in shape and being a big guy, and he actually made me self-conscious!” Bautista said. “I swear to God, I promised him that in November, when I do some work on [Avengers] 4, I told him, ‘I will be in better shape for that because you make me self-conscious, fucker!’”

Brolin’s transformation was so drastic that Bautista couldn’t recognize him when he first saw Brolin’s new physique in June. “I was out in California in June doing another project, and he walked up to me at Gold’s Gym and goes, ‘Dave,’ and I am looking at him. And he said, ‘It’s Josh,’ and I was like, ‘Holy fuck!’” Bautista said. “He literally transformed himself in a matter of months. He is a stud. He is not only jacked, but he is shredded. His face is all sunken in like a model. He is like a completely different person.”

When Avengers 4 premieres in 2019, maybe Bautista will be the one that makes Brolin self-conscious.