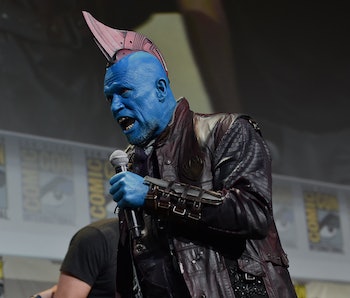 “Volume 1 and Volume 2 were [Peter’s mom] Meredith’s song choices, her communications to Peter,” Gunn explained in the live Q&A session. “In Volume 3, the song choices will be Yondu communicating to Peter.”

In Guardians of the Galaxy Vol. 2, which was predominantly a story about fathers, Star-Lord’s Walkman cassette player was crushed by his biological father Ego (Kurt Russell). Although Star-Lord won the fight against Ego, he still had to be rescued by his foster father Yondu (Michael Rooker), who initially abducted Peter to bring him to Ego years ago until Yondu found out Ego’s true intentions.

At the end of Vol. 2, Kraglin (Sean Gunn) gives Peter a Microsoft Zune. While it’s unknown whose music is loaded in the Zune, Yondu may have done some illegal downloading before his death. He was a pirate, after all.

The Guardians will return next year in Avengers: Infinity War, which will be released in theaters on May 4, 2018.