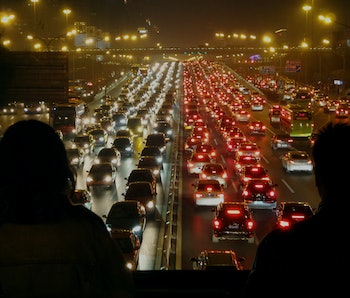 The moon is about to block out the sun, casting darkness through the “path of totality” for a short time on Monday. But even when the sun goes out, life must go on, and people might have to get places. If you absolutely have to drive during the eclipse, an extremely rare astrological phenomenon that only happens once every few dozen years, here’s the best way to do it.

The Federal Highway Administration has a series of tips for drivers during the big dark day, which are mostly just tips for good driving in general. The eclipse happens in the continental states from about 9 a.m. to a little before 3 p.m. on the east coast, moving rapidly from west to east. In a given location, the phenomena can linger for more than two minutes, which is a significant amount of time on the road.

Don’t stop along the interstate or park on the shoulder during the event, and exit the highway to a safe location before viewing or taking photographs of the eclipse

People are going to be extremely distracted, so make sure you’re pulled off the road, and in a safe location. It’s going to be interesting to see what this does to major cities like Midtown Manhattan, or the freeways in the Seattle area or anywhere else in the eclipse’s path.

This is a pretty good rule even when the sun is shining, which it will not be during the eclipse.

You absolutely need some form of eye protection to view the eclipse without frying your eyes, but they also make you completely blind, so uh, don’t do this? See the first tip. Pull over, put your glasses on, and enjoy.

Turn your headlights on — do not rely on your automatic headlights when the eclipse blocks out the sun.

The sun will not be shining in the middle of the day so it’ll be dark. Turn your headlights on in the dark, people.

Watch out for pedestrians along smaller roads. People may be randomly parking and walking alongside the roadside in the hours around the eclipse to get the best view.

There’s gonna be a bunch of people wandering around with stupid-looking glasses, welding helmets and colanders on their heads, please try not to hit them with your cars.

Prepare for extra congestion especially on the interstates in the path on the day before, day of and day after the eclipse.

There’s a lot of traffic! The eclipse is a cool and fun thing that people want to see, so if you’re in a high-traffic area, plan for that!

Avoid travel during the eclipse or in the area of the main path if you can.

No, seriously — eclipse chasing is nuts — and there are some solar-science freaks who book travel years in advance for eclipses. Hotels are already sold out, so if you’re booking a last-minute eclipse trip, don’t.

But seriously, the best advice for driving during the eclipse is, well, don’t do it. Just don’t drive! Nobody is going to be doing anything during the entirety of the eclipse, most likely, so it’s going to be fine if people get a little delayed. Just pull over and enjoy the strange wonders of the universe, y’all!