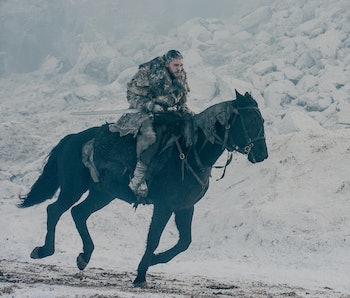 Of the five potential spin-offs of Game of Thrones, at least one will feature events that are recognizable to book readers and feature magic and mythical creatures. On Friday, Jane Goldman, a screenwriter who is developing a spinoff with George R. R. Martin, confirmed as much to IGN.

“I think as a book reader or as someone who watched the series, you would say, “Oh, that! OK.” Yeah, it would be recognizable as a past event,” she said.

About whether this show would have magic and supernatural creatures, she said, “that’s an aspect that I love so, umm, yeah…I guess so, yeah.”

Believe it or not, her vague comments do narrow it down a bit.

It’s already been announced that the spin-offs will all be set in eras outside of the War of the Five Kings, and they won’t feature any Game of Thrones characters. George R. R. Martin has announced that Robert’s Rebellion will not be one of the spin-offs.

But it seems likely that she and Martin are working on either the Targaryen civil war (The Dance of the Dragons) or Aegon the Conqueror’s story (Aegon’s Conquest) — both of which feature lots of dragons — or the mysterious supernatural event known as the Doom of Valyria.

There is no word yet on when the Game of Thrones spin-offs will premiere.