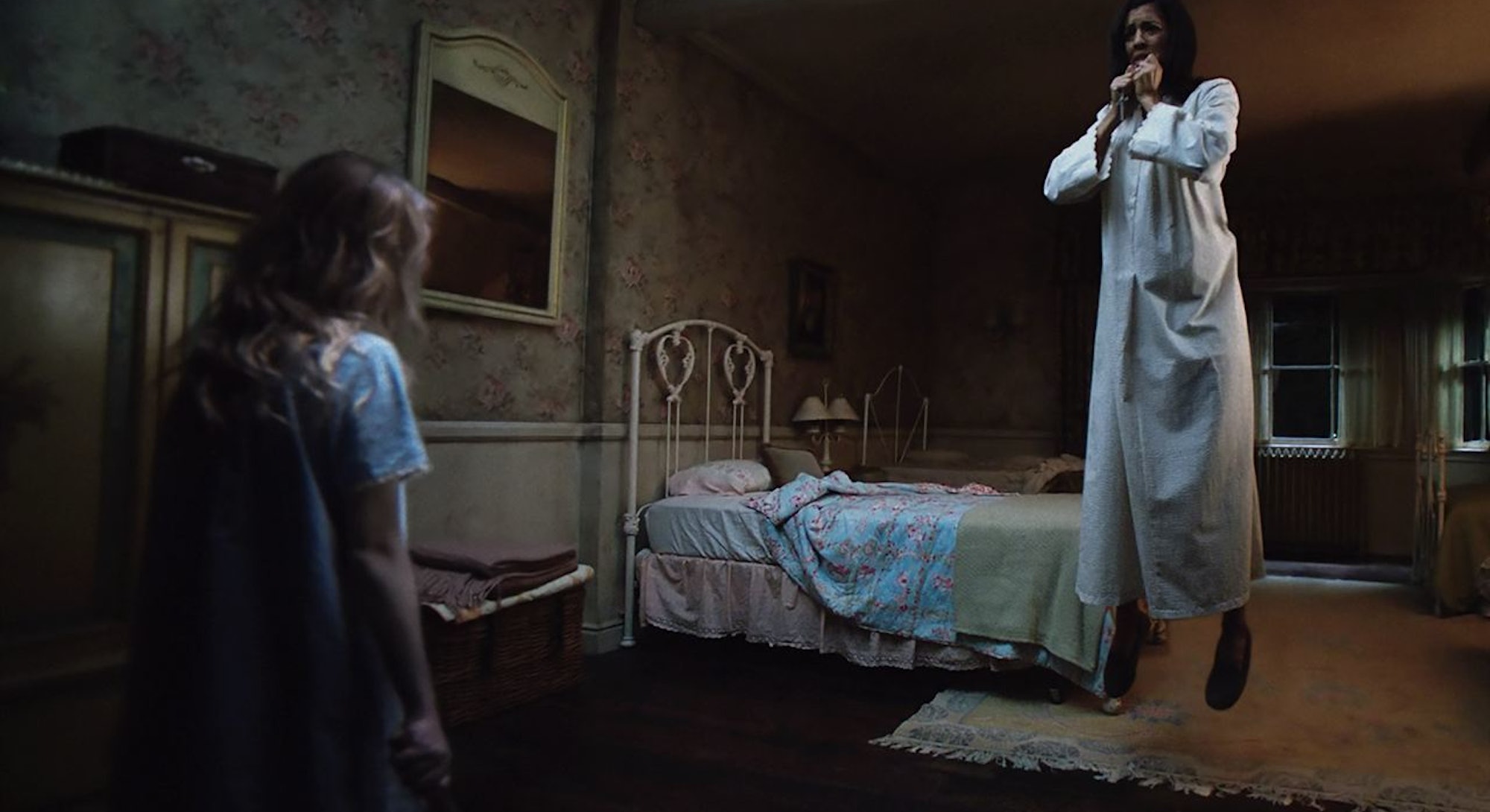 Mary Chasteen’s been in the exorcism business since 2008, so she knows Hollywood has it all wrong.

“It’s always portrayed as you’re walking along and, wham, the demon’s in you,” Chasteen tells Inverse. “Then a priest tries to help you and, bam, they’re possessed. It’s ridiculous. You know, if a demon could just override free will, then who wouldn’t be possessed? They’d make evil puppets out of all of us. They would just destroy God’s creation.”

As the auxiliary and confidant to Father Vincent Lampert, Exorcist of the Catholic Archdiocese of Indianapolis and Pastor of Saint Malachy Parish in Brownsburg, Indiana, Chasteen has seen things that she says will stay with her for the rest of her life. But the disturbing imagery of her real-world work — humans whose bodies, minds, and souls have, according to the Catholic Church, been inundated by demons — isn’t much like what horror films would have you believe.

Many would balk at the idea that Hollywood’s portrayal of demons and exorcism is up for debate. Hollywood’s not exactly known for its realism, but viewers might assume that debating the accuracy of something as far-fetched as exorcisms is pointless, right? Not so, according to Catholicism, which is practiced by roughly 1.2 billion people around the world. Catholics hold that demons, exorcism, and the associated trappings are very real, and a warped version of their beliefs tend to make their way to the screen.

Annabelle: Creation, the fourth movie in the Conjuring franchise and the aptly named prequel to 2014’s Annabelle, that horror movie about the demonic doll who’s a little too fond of rocking chairs, just premiered in theaters on a $15 million budget. That’s quite a bit of money for the genre, and people seem to really love the Conjuring franchise. So, what’s the official consensus about the creepy shit that goes down in these and other horror movies? What’s the Catholic stance on exorcism, horror movies, and Annabelle?

“Most of it is fake,” Chasteen says of the horror genre’s grasp on exorcism. “Unlike Hollywood, we strive to remove all drama and focus on faith and prayer.”

And Chasteen would know; on the rare occasion that Fr. Lampert does perform an exorcism, she’s the one communicating with the person’s friends, family, and loved ones, though Chasteen emphasizes that actually going through with an exorcism is always a last resort. She prays with affected loved ones, offering advice, comfort, and ministry during what can be an incredibly traumatic event.

But, overall, it’s not something she likes to dwell on. “It’s very painful,” she says. “You see people at their worst. It’s excruciating to watch — there’s usually a lot of painful things in the person’s past. Family members’ reactions range from ‘thank God they’re getting help’ to cussing you out.”

For people who the Catholic faith truly sees as being possessed, it can be similar to a person getting swindled by a cheap salesman. “It’s still the swindler’s fault,” Chasteen says. “People beat themselves up about that but, you know, the demons don’t quite care.”

Chasteen says that, according to the Catholic faith, “possession means you’ve given permission for the demonic to exert itself in your life. That you’ve formed a relationship, a bond of some nature,” either through repeated, lifelong mortal sins of a “grave matter” or by purposely interacting with demons.

In Galatians 5:19-20, The Bible lists some of these sins as “adultery, fornication, uncleanness, lasciviousness, idolatry, witchcraft, hatred, variance, emulations, wrath, strife, seditions, heresies, envyings, murders, drunkenness, revellings, and such like.” And while Chasteen didn’t qualify exactly how many sins a person needed to engage themselves in for how long to be open to demonic influence, that’s quite a hefty list.

But, sin isn’t the only way to open yourself up to demons; intentionally interacting with them is just as bad, if not worse. Occult practices and satan worship allow demons into your life and your body, and Chasteen says she’s “had [psychic] mediums who’ve called and they know they have demons because the demons help them to see things otherwise unknown to others.”

That’s actually one of the signs of possession that horror films apparently get right. According to Chasteen, among the signs of possession are “somebody who knows things they shouldn’t know [and] speaks languages otherwise unknown to them.” Possessed people also have “an aversion to holy objects,” which is a common (and accurate) horror trope.

Movies would have you believe that, upon recognizing these symptoms, the next step is a priest barging into the room brandishing a crucifix. In reality, though, exorcisms don’t start with a priest leaping to the rescue of a hapless family who just so happened to move into a demon-infested home.

In the Catholic church, the exorcism process starts with a psychological evaluation.

Chasteen has a religious background — she’s got a master’s degree in theology, completed a second master’s degree at a Vatican exorcist course in Rome alongside Fr. Lampert, and acts as the priest’s go-to sounding board, assistant, and confidant — but, she and other exorcism experts often turn to doctors and other medical professionals. Getting a person the help they need doesn’t always involve religious authority.

Chasteen says a “good amount” of the people who come to her and Fr. Lampert for an exorcism are actually more in need of a mental health professional than an exorcist. A person’s health is the “number one concern,” which is why Chasteen regularly consults with medical professionals. These professionals includ psychiatric nurses who act as exorcism auxiliaries, the science to Chasteen’s faith.

People with a greater, immediate need for science over religion “are directed back to their psychiatrist, psychologist, or family members to get help,” Chasteen says. Just because a person believes they’re possessed doesn’t mean they really are, according to the Catholic faith. Performing an exorcism for someone who isn’t really possessed would “actually be awful” for their health and potentially cause a lot of damage.

The one thing demons are powerless against, though, according to Chasteen and the Catholic church, is the power of God.

And that’s why the real-life Annabelle doll baffles Chasteen. The real doll, a Raggedy Ann rather than the porcelain-looking one from the 2014 film, currently sits, still haunted, in the Warren’s Occult Museum in Monroe, Connecticut. Ed and Lorraine Warren, the demonologist and psychic medium duo portrayed in the Conjuring series by Patrick Wilson and Vera Farmiga, respectively, declared the doll as being “manipulated by an inhuman spirit” in 1970. So, rather than having the spirit removed from the doll, they kept it there and placed it in a glass box in their museum.

“Objects can be possessed,” Chasteen says. “The church believes that. Why you would leave an object possessed is beyond me.” She says there’s no way the spirit couldn’t be removed, as the power of God will always trump the power of demons and spirits.

In both of the Annabelle films, Annabelle (2014) and Annabelle: Creation (2017), the doll goes up against members of the clergy, only to come out the other side triumphant and, perhaps, looking just that much more menacing than she did before. The word of God can trap the demon and control it for a short period of time, but religion always end up losing in the end.

“I’m glad that people understand that there’s a spiritual world,” Chasteen says of horror films using exorcism and demons for entertainment. “It’s kind of a mixed thing isn’t it? I really hope that people understand that when they go to the movies, it’s fake. It really doesn’t track with what faith teaches us. It doesn’t really bother me; I would say, if somebody can go and watch a movie like The Exorcist or Annabelle and enjoy it because it scared the living daylights out of them but they know it’s fiction, then fine, go for it.”

So, basically, enjoy your horror movies; just don’t try to actually interact with the demons inspiring the on-screen scares.