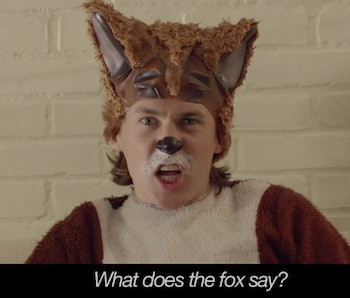 So what exactly does the fox say? It sounds a lot like gibberish and doesn’t really make any sense, but that was the point.

Two years ago a pair of Norwegian brothers, going by the name Ylvis, and their ridiculous song “The Fox (What Does the Fox Say)” skyrocketed to online fame. The YouTube video reached 20 million views in less than a week, went on to become the most watched video on the site worldwide for the year, and it peaked at No. 6 on Billboard’s Hot 100 singles chart.

Nonsense lyrics, visual gags, eurosynth beats, and slick production design mixed with a winking DIY aesthetic, made the song and the video ubiquitous as digital kitsch at the tail end of 2013 and into 2014. Ylvis hasn't really been heard from since.

Ylvis is actually Bard and Vegard Ylvisaker, and their schtick has been popular in their homeland for about 10 years. They’d scored some minor YouTube hits before, and parlayed comedy show appearances in Norway into a late night talk show in 2011 called I kveld med Ylvis (translated: Tonight with Ylvis). It blends absurdist sketches with sit-down interviews — think Flight of the Conchords meets Jimmy Fallon.

"The Fox" was originally intended to promote the newest season of their show. The brothers enlisted StarGate — the two Norwegian-born producers behind hit songs for artists like Rihanna, Selena Gomez, Katy Perry, and others — to deliver them a pop gem. The rest, at least according to them, was supposed to be bad.

“We thought, 'Hey, we have this old idea about the sound that the fox made, because no one really knows,'” they told Hollywood Reporter in 2013. “So we decided to do that instead of something intelligent.”

Norwegians, fully aware of the band's style, were less surprised. But the puzzling lyrics and the duo’s relative obscurity in the States gave it a meme-worthy shareability. Anything truly cool starts out as at least partially confusing, and "The Fox" was some full-on what the hell is this? action on display, especially once you got “wa-pa-pa-pa-pa-pa-pow” ringing in your ears at night and “hattee-hattee-hattee-ho” woke you up in the morning.

In the song's anti-hit mentality lies its charm, a veritable “Springtime for Hitler.” It sent up mindless EDM pop by blending an anarchic spirit with a catchy but absolutely weird tune, it reaches so-bad-that-it’s-good territory. Also, it's mildly hilarious.

Before anyone could really stop to ask, “What does the fox say?” Ylvis performed the song on Fallon, the Today Show, Ellen, and more; they signed a worldwide record deal with Warner Brothers, and played music festivals all over the world. They even wrote a book, What Does the Fox Say?, which made Amazon’s top-sellers and debuted at No. 1 on the New York Times’ children’s book list, because kids these days will read any damn thing.

After the parodies, all the lip syncs, and the general Internet fervor faded, Ylvis receded into meme obscurity, as obscure memes tend to do (though a version of the song sung by schoolchildren had the honor of being lampooned by John Oliver earlier this year). Ylvis always knew their fate would be thus. "If you guys like what we do in the future, that's a good thing, Bard told the Hollywood Reporter in 2013. "If you don't, we'll return to our office in Norway and still be happy."

They were comedians first and foremost, and it just so happens that a goofy concept they came up with caught on in a massive way. The fame and fortune was a fallback to what they really wanted to be doing anyway: I kveld med YLVIS.

The pair released their first album last year titled Volume 1, which in a bold move doesn’t even include “The Fox." They also maintain a surprising number of other songs in their humorous arsenal. None has hit like "The Fox," but there's no formula for meme magic of that magnitude.