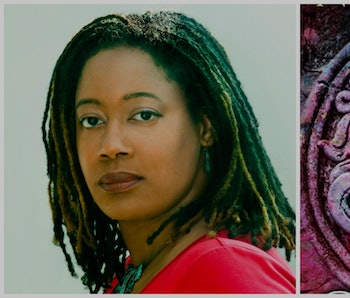 An ecological science fiction epic continues to dominate the field of sci-fi novels. Author N.K. Jemisin has won the Hugo Award for best novel of the year for her book The Obelisk Gate. And it’s her second year in a row to get the award. Last year, she won the Hugo for the first book in the trilogy, The Fifth Season.

On Friday, in Helsinki, Finland, at the 75th annual “WorldCon, the most coveted award in science fiction and fantasy publishing was awarded to Jemisin. Charmingly, though Jemisin was not in attendance, she did mention on Twitter how excited she was, despite not being there in person to attend. Even more hilariously, Jemisin also claims that she forgot that the Hugos were even happening on the day they happened.

Collectively, the novels The Fifth Season, and this year’s winner, The Obelisk Gate are part of a trilogy called The Broken Earth Series. The essential premise deals with planet populated by one massive supercontinent called “the Stillness.”

The Hugos were established in 1953, and named for Hugo Gersnback, a 20th century futurist who also published and edited the magazine Amazing Stories. After his work on Amazing Stories, Gernsback created Science Wonder Stories, which was later just called Wonder Stories. These types of magazines are sometimes referred to lovingly as “the pulps.”

Obviously, the scope of published science fiction has come a long way since Hugo Gernsback’s day. The novels of N.K. Jemisin are not only startlingly relevant, but also completely enthralling pieces of precise world building. And like those old pulp magazines, you could call her books both amazing, and wonderful.

The Hugo Awards are held every year in a different location at a convention called “The World Con.” Next year’s WorldCon will take place in San Jose, California.