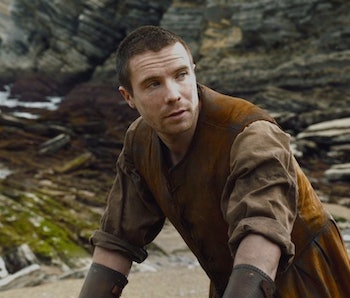 A lot of people — from Craster to Tormund — love to comment about how “pretty” Jon Snow is on Game of Thrones. But as of now, Jon Snow is no longer the prettiest bastard in Weseros.

Spoilers below for the fifth episode of Game of Thrones Season 7.

Gendry is back, after the show seemingly forgot about him for four damn seasons! Robert Baratheon’s bastard was Arya’s first and most loving road-trip buddy in Seasons 2 and 3. He then had an unfortunate encounter with Melisandre and her sex magic. All hope seemed lost for Gendry, as Meliandre and Stannis threw him in the dungeon at Dragonstone, which was Stannis’s stomping grounds at the time.

But then Davos, Universal Dad of Westeros, set him free, much in the same way that Jaime freed Tyrion from jail at the end of Season 4. Davos put Gendry in a row boat and wished him luck. That was his last appearance on the show, way back in Season 3. Needless to say, when he finally showed up again in Season 7, Game of Thrones fans had strong reactions to his return.

Most fans loved his interaction with Jon Snow and their bonding over their father’s friendship and bastard status.

People were really into his connection with Jon

Some were more into his connection with Arya, even though they have not yet reunited since Season 3

Some were just hyped about his newfound hammer skills

Some pointed out the irony in his bonding with Jon about their fathers’ friendship, since Gendry’s dad actually killed Jon’s real dad in battle