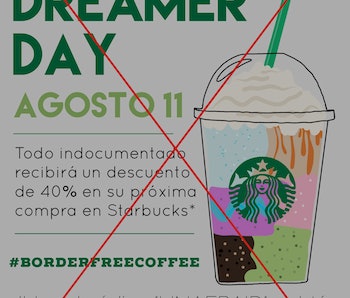 Users on 4chan, a dark corner of the internet where bigots thrive, put a vicious plan into action this week to expose undocumented immigrants to the U.S. Immigration and Customs Enforcement (ICE). They spread the false information — backed up by fake posters, some in Spanish — that Starbucks would offer free coffee to “Dreamers” on August 11, hoping to get some undocumented young people to publicly reveal themselves. Some 4chan users even planned to alert ICE.

The hoax seems to have originated with an anonymous 4chan user who posted on Wednesday: “How about we meme ‘Undocumented Immigrant Day’ at Starbucks into existence? Announce free coffee for all illegals on a certain date. August 11? 11 looks like II (for Illegal Immigrant). I’m open to suggestions there. Name a liberal place for all illegals to go at once and demand free stuff.”

People quickly jumped on board, adding anonymous comments like: “QUICK EVERYBODY START MAKING UNDOCUMENTED IMMIGRANT DAY PROPAGANDA MEMES AND POST THEM ALL TO STARBUCKS’ PROFILES ON ANY KIND OF SOCIAL MEDIA PLATFORM YOU CAN FIND,” and “I vote we call ICE on ‘em. Send ‘em packin’ when they just wanted free coffee.”

Thread participants settled on calling the fake event “Dreamer Day” to attract undocumented people who immigrated to the United States as children, called “Dreamers,” who have been granted some protections under the 2012 Deferred Action for Childhood Arrivals act but were denied a path to citizenship after the overwhelmingly popular DREAM Act failed to pass in 2010.

The plotters also created some sickening promotional posters, such as this:

And at least one in Spanish:

The thread recommends that participants create social media accounts to spread the message, and a brief search on Twitter for the hashtag #borderfreecoffee makes it clear that many have done so, though not always convincingly; one user has been alternating between retweeting promos full of liberal jargon and messages like “Jews control America” and “When you’re white there is no upgrade. DON’T MIX.”

Starbucks confirmed to Buzzfeed News that the event is a hoax, and has been correcting some Twitter users who promote it:

ICE has not released a statement on the campaign.