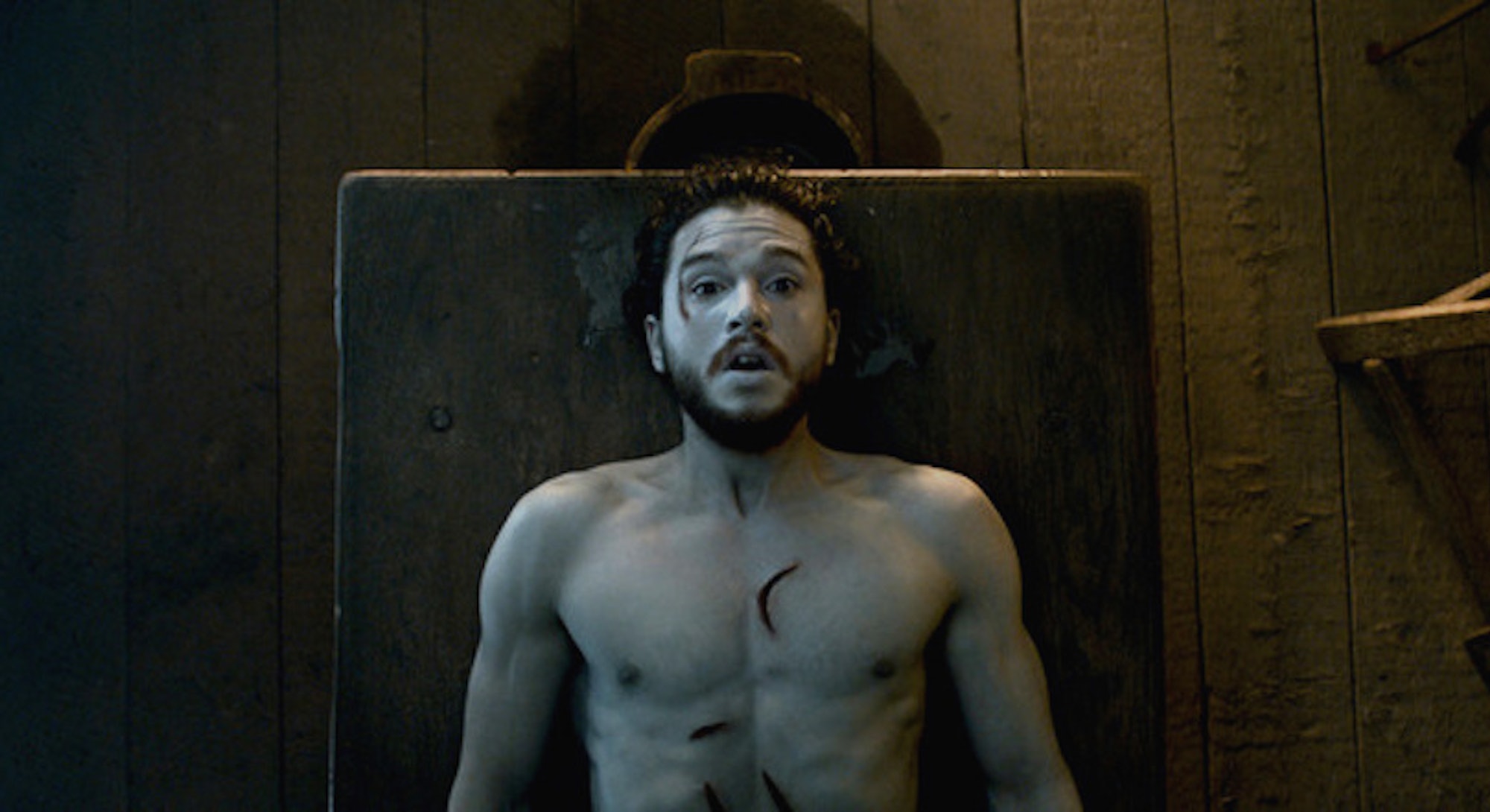 Jon Snow, the bastard of Winterfell and undead King in the North, might soon face an embarrassing moment with Daenerys Targaryen. The fourth episode of Game of Thrones’s seventh season heavily foreshadowed that Snow might try and engage with the Dragon Queen, neither of whom know that she’s really his long-lost aunt.

And if he does, winter may not come at all.

In a recent interview, George R.R. Martin, author of the books on which Game of Thrones is based, insinuated that Snow might have a permanent case of erectile dysfunction. And in conversations with Inverse, Gregory Fraley, Ph.D., a behavioral neuroendocrinologist and expert on animal sex from Hope College, corroborated Martin’s point, arguing that just because Snow rose from the dead doesn’t mean his sword did.

Jon Snow is a wight

In his July interview with Time, Martin was asked about how being killed and resurrected affects a character physically and emotionally. In response, he compared Snow to Beric Dondarrion, the only other character to be resurrected by the Lord of Light. In Westeros, the price one pays for resurrection is a slow chipping away at the core of what makes them truly human:

“And poor Beric Dondarrion, who was set up as the foreshadowing of all this, every time he’s a little less Beric. His memories are fading, he’s got all these scars, he’s becoming more and more physically hideous, because he’s not a living human being anymore. His heart isn’t beating, his blood isn’t flowing in his veins, he’s a wight, but a wight animated by fire instead of by ice, now we’re getting back to the whole fire and ice thing.”

The lack of blood flow will stop an erection just as The Wall stopped the wildings from beyond.

According to Game of Thrones lore, Snow’s body is technically dead, and it makes more sense to think of him as a consciousness projected into his physical body than a living person. Undead Jon’s physical form is not as it always was: Like the wights resurrected by the Night King, he’s permanently suspended in the physical condition he was in when he was reanimated, and he will neither fully recover nor decay further. The confusing implications of Martin’s interview on Snow’s romantic future quickly piqued Reddit’s interest, and one crucial question emerged from the heated discussion: What happens when the King in the North ventures South?

Before Martin’s interview, Snow’s situation was a lot less fraught. The show had made it obvious that undead Jon can fight, pant from exhaustion, and, crucially, bleed. Fraley, incidentally also a big Game of Thrones fan, weighed in on whether Jon Snow’s penis will work when the fateful moment presents itself, telling Inverse that because Snow “got better” from being dead it’s likely he can, in fact, get aroused.

“Presumably, therefore, all of his physiological systems are perfectly functional and he should be able to be a fully reproductive individual,” says Fraley. “The irony there, of course, is that members of the Night’s Watch aren’t supposed to indulge in such activities,” he adds.

To get erect, explains Fraley, both the nervous system and musculoskeletal system needs to be intact. The fact that Snow’s veins can pump and spill blood suggests that, in addition to retaining control over his skeletal muscles — the muscles that people consciously control to move, fight, and make passion — Jon’s autonomous smooth muscles, and the parts of the nervous system that control it, still function as well. These are the muscles that control anything that happens automatically in your body, like breathing, digestion, defecating, and sustaining an erection, which is why they sometimes happen at unwanted times. Autonomous smooth muscle is controlled by the autonomic nervous system, which usually operates whether a person is conscious or not.

“If we accept that the brain is still functioning, then so is the spinal cord,” says Fraley. “Many basic movements of our skeleton are reflexes controlled by the spinal cord. Just don’t ask these folks to do anything complicated like texting or dancing Swan Lake.”

Jon’s blood-filled scenes suggest that Martin’s point about the undead having no blood flow is moot — besides, bringing him back as a mere shell of his former self probably won’t be great for the series — and yet, he still said what he said, and that has to be worth considering.

No blood flow, no erection

When he takes Martin’s comments about the undead having no blood flow into account, Fraley’s prognosis for Snow’s sex life is a lot less optimistic. “Without a heart beat … there is no blood flow, so no sexual desire, and no physiological erectile reflexes,” Fraley says. “Erectile function is solely dependent upon blood flow. No beating heart, no blood flow, no erection — either penile or labial erection.

In other words, if Snow is permanently stuck in the dead state he was in when he was first reanimated, then his penis, despite being intact, is probably still incapable of getting engorged with blood. No matter which parts of Jon Snow’s body still work, a beating heart is crucial for the ability to get erect.

“All the Viagra in the world won’t fix the lack of blood flow,” Fraley says.

Fraley wants to believe in the interpretation that Snow is a perfectly normal person — albeit a more brooding and resentful one — who has risen from the dead, but says it’s simply impossible to support that belief if Snow’s heart is, as Martin said, not capable of beating.

Even if Jon’s nervous system still has control over other smooth muscles and the vast network of nerves dedicated to getting it up is intact and working, he’d still need to find a way to get his blood jam-packed into his peen. Without that one crucial step, the smooth muscle of the penis is no better than a deflated balloon.

But there remains a glimmer of hope for Snow’s penis: the postmortem erection.

How to get that blood flowing

Undead Jon’s problem is that he has plenty of leftover blood (well, whatever remained after being brutally stabbed by Alliser Throne and company) and, if we take Martin’s word for it, no way to move it around. The question that remains is: How can Jon get blood to move toward his crotch and stay there long enough to engorge his penis?

Of course, Jon couldn’t get his body to move at all without a heartbeat, but the magic of his resurrection seems to have given him control over his skeletal muscles, so he may have a way out.

When people suffer from pooling, stagnant blood in the lower limbs, doctors often recommend low-impact exercise, which helps to move the blood around. Commonly suggested exercises include walking, swimming, and calf raises, but they could theoretically include participation in an gory battle to reclaim your ancestral home from Ramsay Bolton.

To get that blood moving crotch-ward, Fraley says that an erection-facilitating protein called GALP might do the trick. The body normally uses GALP to channel blood toward the reproductive organs, when the time is right. “GALP replacement therapy can restore reproductive function,” says Fraley, who thinks it might be the best bet for wights looking to restore their sexual desire. While there are no documented cases of zombies trying to beat erectile dysfunction in the entirety of academic biomedicine, this research suggests that a nice, vigorous swordfight could indeed help Jon manually get his blood pumping, even if his heart isn’t racing.

Exercise and supplements: a not-unheard of recipe for sexual vigor. As Bronn told Jaime Lannister, “There’s nothing like a good fight to get you in the mood for fucking.”

The big picture for the tiny pecker

If what Martin says about Jon Snow having no heartbeat is true, then Daenerys will probably be sorely disappointed when she tries to bang her nephew. Jon’s only hope is to use vigorous exercise to get his blood circulating, and then hope that his autonomous nervous system still works well enough to pull together a erection. But if he is, as Martin insinuated, just a consciousness projected into a dead body, this may be impossible.

Jen Snow, a moderator on the popular subreddit A Song of Ice and Fire, imagines this would make for a particularly ironic scenario. “Maybe we’ll see a scene in which Jon mourns never being a father because he realizes that he’s now physically unable to,” Snow tells Inverse. However, she warns against putting too much stock into the minutiae of Jon’s sex life: He was sworn to celibacy anyway, so any sexual dysfunction he might experience should be “about the price of magic.”

At least we know that Jon is good at “doing that thing with his tongue.”