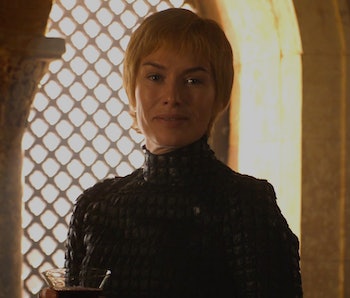 In the fourth episode of Game of Thrones Season 7, Daenerys Targaryen uses dragonfire to lay waste to Cersei Lannister’s army and supplies. But before you polish off the Iron Throne for Dany, Cersei has a card up her sleeve that could change the tide in her favor: the Golden Company.

If you haven’t read the books, that name-drop might have been a “golden what now?” Here’s what you need to know.

In her short scene with Iron Bank rep Tycho Nestoris in “The Spoils of War,” Cersei says, “I need to expand my armies, my navies. My hand Qyburn has made overtures to the Golden Company in Essos.”

The Golden Company is the largest and most expensive army of exiled sellswords in The Free Cities. It’s basically an army filled with mercenaries — people like Bronn, Daario Naharis, and Jorah (Jorah was actually a member of the Golden Company for a bit before joining Dany’s crew.) They were briefly referenced in Season 4 when Davos floated the idea of hiring them by Stannis Baratheon.

The Golden Company was started by a Targaryen bastard, Aegor Rivers. He was a legitimized bastard of King Aegon IV Targaryen, one of the worst Targaryen Kings. They are notorious sticklers for their contract, just as Lannisters are sticklers for paying debts. However, in A Feast For Crows, they break contract with the Free City of Myr — that’s right, the place where Thoros, the Hound’s man-bun travel buddy, is from.

In the books, they’re part of a plot line involving [a possibly long-lost Targaryen](http://awoiaf.westeros.org/index.php/AegonTargaryen(son_of_Rhaegar)) that never made it into the show. It’s unlikely Game of Thrones will introduce a new character when it only has nine episodes left. Instead, the Golden Company will likely entangle with pre-existing characters, if they show up at all. The best contenders at the moment? Jon Snow, who is the current long-lost Targaryen, or Jorah, since he has ties to it.

Cersei has the gold needed to hire the Golden Company — that part of the loot train had already safely made its way to King’s Landing when Dany attacked. But, in the ultimate twist of irony, if the Targaryen, bastard-founded Golden Company gives Cersei an advantage to bring down Daenerys, it will be the legacy of another Targaryen who takes them down.