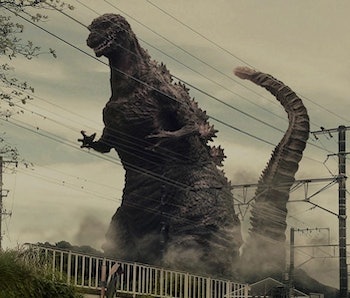 After over 60 years and nearly 30 films, Godzilla has entered the era of connected franchise films and fan theories. And quite fittingly, it’s taken this next step in a movie all about the monster’s many different evolutions — the last of which is fueling a lot of fan speculation.

In Shin Godzilla, the 29th movie about the terrifying mutant reptile from Japan’s Toho Studios, a new — if familiar — origin story is established. A massive radioactive beast emerges from the sea, stomps across Tokyo and sets it aflame with its atomic breath. While the monster’s design has changed over the years, director Hideaki Anno’s version of Godzilla transforms throughout the movie, taking on increasingly terrifying forms until it reaches its zenith as a hulking, inflamed killer. It goes through four different evolutions before its destruction is halted… at least temporarily.

In the last shot of the movie, the audience is given a look at Godzilla’s tail, which is unlike any version of the kaiju’s rudder ever before seen. The fifth version of the monster, it seems, will be many little monsters, which are spawning from the tip of the massive appendage on an otherwise frozen Godzilla.

There is little doubting their existence; the screen grabs are clear and the concept drawings on display in the book Art of Shin Godzilla is definitive. Plus, Godzilla movies have a history of teasing future installments with foreboding developments at the very end of movies (see 1991’s Godzilla vs. King Ghidorah for a good example). Just what exactly these little monsters are, however, is up to interpretation.

There are many theories, but most point in the same direction: Godzilla can reproduce asexually, and is giving “birth” through its tail to many small humanoid monsters, with long limbs and dorsal spikes. They’re grotesque looking, like a horrible offspring of xenomorphs in Aliens and hellspawn demons.

Over the course of Shin Godzilla, the titular beast evolves to correct its weaknesses, frustrating the military trying to destroy it. No single weapon can stop it — Godzilla learns to compensate for blood loss, cool its body down, regenerate its own body, and fight off bombs with atomic breath and dorsal photons. Ultimately, the Japanese military and scientists are able to stop its onslaught with national pride and teamwork — which to many fans suggests that Godzilla’s next evolution would create its own team, of sorts, thus explaining the humanoid creatures coming off the tail.

Others like to point out that there seems to be a face in the tail, which would suggest that Godzilla either absorbed another creature… or a human.

Early on in the film, they discuss a professor named Goro Maki, who was run out of Japan after his wife died of radiation sickness. While working in America, he began research on a pre-historic monster at the bottom of the sea that was powered by nuclear waste; he was the godfather of Godzilla, but was presumed to have committed suicide because no one would believe him.

The fan theory is that instead of killing himself, Goro Maki became a part of Godzilla, and it is his head at the end of the monster’s tail in its fifth evolution. The video above goes into further detail about this theory.

Others believe that the humanoids are based on the skeletons of humans who fused with Godzilla’s radioactive tail during its rampage across Tokyo. It’s just as good a theory as any — which is to say that we really won’t know the answer, at least until a Shin Godzilla sequel hits theaters. And given that this was the highest earning Godzilla film yet, there’s every chance that a follow-up is in development.