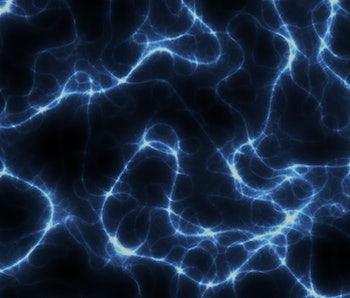 Energy will never cease to be a concern for human beings, so long as our species plans to keep growing and expanding. There’s no shortage of scientists and engineers trying to come up with solutions that might help us avoid a catastrophic energy shortage. Some of these ideas seem pretty feasible, such as switching to renewables like wind and solar. Some are incredibly farfetched and probably impossible, like cold fusion. And then there are some ideas which are downright bonkers — but if true, could essentially change everything we know and love about human civilization.

Zero-point energy, also known as ground state energy, could be the greatest gift the quantum world can ever give us. It’s a byproduct of the fact that subatomic particles don’t really behave like single particles, but like waves constantly flitting between different energy states. This means even the seemingly empty vacuum of space is actually a roiling sea of virtual particles fluctuating in and out of existence, and all those fluctuations require energy.

If there’s as much energy in those fluctuations as some — though definitely not all — physicists believe, and if we could ever learn how to tap into this phenomenon, we would gain access to an unparalleled source of energy. Zero-point energy could power the planet with the strength of multiple suns, making it easy for us to solve Earth’s energy problems forever or to travel beyond the solar system and take our place among the stars.

However, we can only guess how much energy is actually contained in the vacuum, with legendary physicists in fierce disagreement on this point. Richard Feynman and John Wheeler calculated the zero-point radiation of the vacuum was so powerful that even a small cup of it would be enough to set all of Earth’s oceans to a boil. But Albert Einstein’s theory of general relativity suggests zero-point radiation would “gravitate” — spreading out throughout the universe and be mitigated to a weak power.

Simply put, we don’t know enough about the universe to figure out whether zero-point energy — vacuum energy — really is a bombastic fountain of staggering power.

Let’s hypothesize vacuum energy is real, and it’s spectacular, and we could maybe one day learn how to tap into it for energy. What would this look like, and what could we do with it?

Perhaps the clearest application would be super-fast spaceflight — the kind that could take you across the solar system in mere hours or minutes. NASA scientists have looked into developing batteries and engines which could theoretically produce a gargantuan amount of energy by harnessing a zero-point energy system based on a notion in quantum mechanics called the Casimir effect. This effect is small, but if there’s a way to observe and intervene with these very small-scale forces, they could work as a potential source of energy for allowing spacecraft to move through space.

There have been many different groups that pitched different ideas, but perhaps the most reasonable findings have come out of NASA’s Eagleworks Laboratories, which claims to have successfully tested a Quantum Vacuum Plasma Thruster. This “Q-thruster”, as outlined by a study that passed peer-review last year, takes advantage of the Casimir effect to create propulsion. In such a device, thrust is created using particles pushing off a vacuum. Nevertheless, it’s not quite clear whether this could work in a real, applicable setting — nor can the paper’s authors dismiss concerns about experimental errors. Many more trials and rounds of validation would be needed to really illustrate that a Q-thruster is viable.

It’s a bit strange to think that centuries after the idea of an “ether” permeating through the world was debunked, physics has come around to say that perhaps there is a universal energy stuck in the empty space all over. It would be a mighty grand thing to find ourselves grasping at that vacuum for an unheralded amount of energy.

But that’s all pretty far away from humanity’s reach for now. For the foreseeable future, it’s probably best to continue banking on solar and wind as acceptable sources of energy, no?