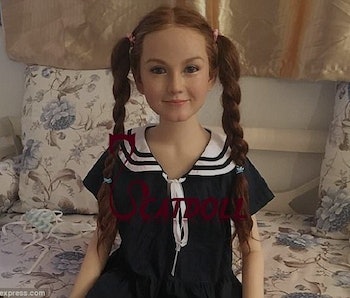 You’ve seen this on Law and Order: Special Victims Unit multiple times: a person confesses to law enforcement or their medical provider that they struggle with sexual urges aimed at minors. They haven’t hurt anyone yet, but they’re asking for help coping with these thoughts. What should society do in this instance?

StopSO, a Welsh charity devoted to preventing and stopping sexual assault through therapy, suggested this week that pedophiles might benefit from the use of child-like sex dolls, which the charity proposes they obtain with a psychiatrist’s prescription. The logic here is that sexual fantasies, when experimented with in private and through solo acts, can be lessened in urgency. By substituting a sex doll or robot in place of a human child, the charity suggests, we may be able to save children from being victimized.

The organization made its controversial suggestion when 100 sex dolls fashioned to look like pre-pubescent children were intercepted by border authorities, on their way into Wales after being purchased on eBay and Alibaba.com. According to Wales Online, “The NSPCC and the National Crime Agency have both called for the dolls to be criminalized and rejected claims they can be used to treat pedophiles.”

Juliet Grayson, chair at StopSO, told Metro UK, “Society needs to reach a point where a teenager can say to his [mother], ‘I am a pedophile’, and she will get him the right kind of help to manage his behaviors in pro-social ways.” David Davies, a member of parliament in Wales, spoke out with some vitriol in response to Grayson’s comments, saying, “Anyone with an ounce of common sense can see these things are quite obscene and should not be allowed into the country, and there is not much I can add to that.” So what does the research tell us?

It’s difficult to make any over-arching statements on pedophilia, partially because the concept is so deeply taboo that researchers have a hard time funding their studies. We’re talking about a population which, upon getting the shit beat out of them in prison, incites glee in most Americans who love to see “evil” punished. To Catch a Predator, Dateline NBC’s on-camera sting operation, revealed the faces of active pedophiles to a thrilled audience of millions from 2004 to 2007.

Prescribing a pliable, childlike form to pedophiles is, though not an active practice, merely a way of trying to placate urges without aiming for a “cure”. Then again, psychiatry hasn’t come up with a system that consistently rehabilitates pedophiles, though Dr. Richard Krueger, the medical director of the Sexual Behavior Clinic at New York State Psychiatric Institute in New York, says pedophiles of different types respond differently to treatments. Patients who express sexual interest in post-pubescent young people in addition to children can be, as Krueger told Live Science “nudged” in the direction of desiring only adults. Those who find themselves attracted solely to children are, Krueger believes, untreatable so far. “In these situations,” he says, “pretty much you can only repress things, and you would use androgen therapy to do this.”

For now, there are no legal changes being made to the state of child-like sex dolls in Wales, or anywhere else in the world. If we one day issue these dolls to self-professed pedophiles, it’ll take a lot over societal and legal overhaul.

See also: The connection between sex doll sales and “men going their own way”