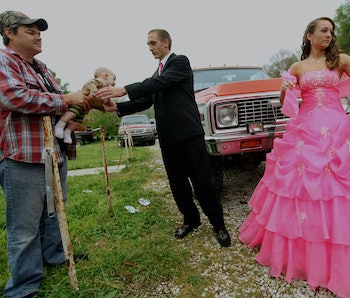 Every so often a report reaffirms guesses you might have had how America is changing, and a report published in the Wall Street Journal on Thursday (paywalled) does just that.

“Struggling Americans Once Sought Greener Pastures — Now They’re Stuck,” is the headline of a 2,600 word, expansive piece that mixes data with personal anecdotes about how more young Americans are rooted to their hometowns, despite those towns experiencing an “economic funk brought on by the decline of manufacturing and farm consolidation.”

Simply put, fewer numbers of Americans are moving away from Appalachia, the Mississippi Delta, and the rural Midwest than did a generation or two ago. In patches, the report indirectly blames regulation — from zoning to state licensing requirements — for making it hard for people to start anew. Cultural differences — like feelings of trust — also crop up. It’s a fascinating read.

The story includes a few remarkable statistics that go a long way to explaining how the culture is shifting. We’ve laid them out below:

The results of this marked decline in mobility include employers in cities where good-paying jobs are greater in number not having enough people to fill them, hurting business growth there, and keeping young people in towns where there are less good-paying jobs.

A lawyer who leaves Alabama, Mississippi or South Carolina for a job in New York, New Jersey or Connecticut would spend just 21% of his income on housing after moving. But a janitor making such a move would have his higher salary gobbled up by housing costs equal to 52% of income.

Houses in small towns cost less, sure, but the cost of housing in cities has skyrocketed. The report cites “years of restrictive land-use regulations” as a reason; meaning the residential zones are already occupied and the housing in those zones isn’t cheap. (Don’t think about finding an open plot of land to build your own home, either.)

Janna E. Johnson and Morris M. Kleiner of the University of Minnesota found in a nationwide study that barbers and cosmetologists—occupations that tend to require people to obtain new state licenses when they relocate—are 22% less likely to move between states than workers whose blue-collar occupations don’t require them.

The hurdle of getting a new license — on top of moving to a city in a new state that could be hours from home — contributes to keeping people, who may find prosperity elsewhere, at home. More than 25 percent of American workers now require a license, a 2015 White House report found. It was around 5 percent in the 1950s.

We Don’t Trust Each Other as Much

According to the [University of Chicago’s General Social Survey], the share of Americans who agree with the statement “Most people can be trusted” has fallen over the past four decades to 31% in 2016 from 46% in 1972. Raven Molloy, an economist with the Federal Reserve Board of Governors, found in research that states with large declines in overall trust were also places where job-switching had decreased markedly.

The WSJ offers an anecdote that’s tough to swallow from Cody Zimmer, 29, who grew up in rural West Branch, Michigan, the parochial focal point of the story. While briefly working in another state, Zimmer recalled this, in the words of the WSJ: “feeling uneasy when a black worker at a Kansas City McDonald’s told him to leave because boys didn’t belong in that part of town.” He also essentially told the newspaper he was turned off by panhandlers in Detroit.

Mobility in Some Rural Counties is Effectively Flat, Despite Poverty

Julie Madsen, the assistant manager at the St. Vincent de Paul thrift store in West Branch, says as many as 80% of queries for financial help come from people under age 35.

Ogemaw County, Michigan has 21,000 residents, but only loses about 21 people a year. There’s stability at home, but also little opportunity to leave. “The county is the closest thing to bankrupt that you could be,” Denise Lawrence, the mayor of West Branch, a town in the county, told the Journal. For young people — those younger than 35 — finding the money to seek out better lives elsewhere is next to impossible.

Now read this: What Never Leaving Your Hometown Does to Your Brain