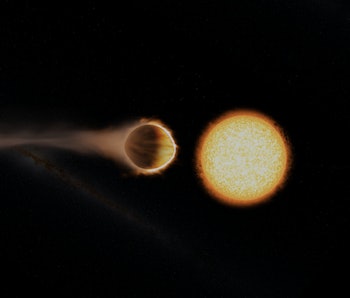 Stratospheres are awesome. They’re the only layers in low atmospheres that increase in temperature with altitude; even neater, Earth’s stratosphere is responsible for the life-enabling ozone layer. In fact, the only thing cooler than a normal stratosphere is a glowing stratosphere, and that’s exactly what NASA just found on WASP-121b, an exoplanet also referred to as “Hot Jupiter.”

This is the first stratosphere ever found on a planet outside of our solar system, though we’re likely to detect more. The finding, as described in a study published Wednesday in the journal Nature, challenges researchers to discover how similar atmospheric processes can happen on very different planets.

When scientists inspected WASP-121b with the Hubble telescope, they found that water vapor at the top of its atmosphere was emitting light. Hot Jupiter’s host star shines light into the exoplanet’s atmosphere, which then emanates back out as infrared heat, except for some light wavelengths that are blocked by vapor.

This light held the key to finding WASP-121b’s stratosphere. Scientists knew that the water vapor would block certain wavelengths if it was cooler than the air below it, but that if it was hotter, the vapor would instead glow at those wavelengths.

Since there was a glow, NASA scientists decided that this atmospheric layer must increase in temperature with altitude, which meant that it had to be a stratosphere.

Some layers in the upper atmosphere can also get hotter as they rise, but study co-author Dr. Tiffany Kataria tells Inverse that, “At the wavelengths used for these observations, we know we are sensitive to the lower atmosphere.” In the lower atmosphere, there’s only one candidate: the stratosphere.

Dr. Kataria tells Inverse that it is “certainly possible” that some of the exoplanets NASA has already extensively studied could have undetected stratospheres.

“There are many planets in this temperature range that could have stratospheres, but we might not yet have the precision to measure its water feature in emission as was done for WASP-121b,” she says. “WASP-33b, for example, is another planet that showed tentative evidence for a thermal inversion (or stratosphere), but the data was not precise enough to make as strong a conclusion.”

But data gleaned from even this one stratosphere will make a big difference for NASA’s research going forward.

“Theoretical models have suggested stratospheres may define a distinct class of ultra-hot planets, with important implications for their atmospheric physics and chemistry,” the study’s lead author, Tom Evans, said in a press release. “Our observations support this picture.”

“We can now compare processes in exoplanet atmospheres with the same processes that happen under different sets of conditions in our own solar system,” co-author Mark Marley said in the release.

In other cool stratospheric news, teams of students are collaborating with NASA to send high-altitude balloons into the stratosphere during the solar eclipse to simulate how life forms react to Mars-like conditions.

More like this
Science
6.27.2022 8:15 PM
NASA mission to an ancient mini-planet in our Solar System suffers major setback
By Doris Elín Urrutia
Science
6.30.2022 10:45 AM
These 5 objects could be Webb's full-color first images
By Kiona Smith
Science
6.26.2022 10:30 AM
New molecules found on a nearby asteroid could reveal the origins of life
By Matt Williams and Universe Today
Related Tags
Share: