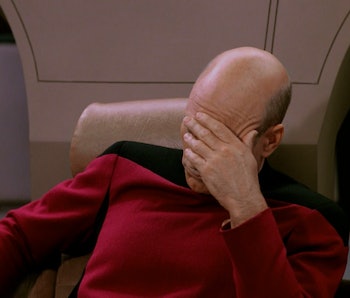 Ah, Tinder. For many of us, the dating app is either a sea of boring “wut up” messages, or an inbox so empty that one might imagine a tumbleweed blowing through. For London local Ben Velzian, Tinder is a fickle mistress, matching him up with a cute guy who blocked him immediately after he sent over a pretty cool gift.

According to Velzian’s Twitter account, which went viral shortly after he shared his dating app story, his potential match asked him out that night. The guy then added, “Any ideas on where to go?” Trying to stand out from the crowd, self-professed “full-time weirdo” Velzian put together a cute, but admittedly weird, Powerpoint presentation of date options.

)After [receiving the tongue-in-cheek Powerpoint](http://www.dailyrecord.co.uk/news/uk-world-news/single-sends-tinder-match-hilarious-10913277, Velzian’s date blocked him on WhatsApp, the app they had moved to after speaking on Tinder. Unable to follow up on his date ideas, Velzian posted his full Powerpoint on Twitter, and the official Microsoft account swooped in to bizarrely comfort him. “His loss,” the digital production suite tweeted, including an image water-marked for Velzian featuring a quote from the 1997 film Titanic.

Velzian’s Powerpoint begins with a professional style summary and overview:

He then moves on to outlining his date ideas, which are as follows:

It’s possible “Tom” was taken aback by Velzian’s spelling errors more dramatically than the Powerpoint presentation, but because Tom blocked him, we can’t ever be sure.

Option 2 gets really detailed and enjoyable; we learn along with Tom that Velzian is into Celine Dion and drinking on dates, and that he keeps Instagram-ability in mind. (And the chance that they don’t get along!)

Option 3 is even more compelling — why isn’t Velzian into vintage clothing? What was he hoping to discuss regarding vintage clothing at a later date? This is also the slide that got Velzian free mini-golf for life at the establishment he suggested to Tom.

Given that Velzian’s initial tweet has nearly 4,000 likes, folks on Twitter are far more delighted by his detailed wooing tactic than “Tom” was. Velzian’s critics say that he came on too strong, but that may not necessarily be the case. Psychological studies have shown that “playing hard to get” (the opposite of what Velzian did here, by demonstrating his interest and effort plainly) only works if your potential date already has a romantic or sexual interest in you. Avoiding signs that you’re interested will not, studies show, ignite passion where it didn’t exist before.

So that means that Velzian’s tactic likely wasn’t the problem — it’s just that “Tom” wasn’t really all that into him in the first place. As Velzian’s many new Twitter fans can probably attest, his being “extra” is likely to work really well in the future, just as long as he tries it on someone who’s already a little curious about him.

See also: The Best Dating Apps of 2017 That Aren’t Tinder