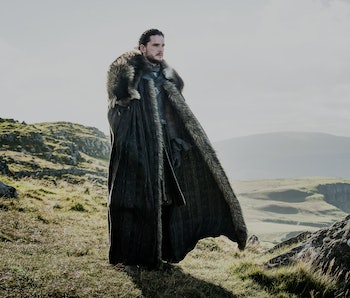 In the third episode of Game of Thrones Season 7, Jon Snow had a friendly reunion with Tyrion Lannister and tense first meeting with Daenerys Targaryen. New photos from the fourth episode, “The Spoils of War,” reveal that the King in the North is probably not finished meetings major characters at Dragonstone.

Theon Greyjoy is going to come to Dragonstone in “The Spoils of War”, and he and Jon don’t exactly have the best history. Back in Season 1 when they were both at Winterfell, Theon was always a dick to Jon about his bastard status. In Season 2, he betrayed Robb Stark and pretended to kill Bran and Rickon. Even though Jon knows Theon didn’t succeed at the latter, he doesn’t forgive and forget those who have betrayed the Starks. The North Remembers isn’t just a fun catchphrase.

It’s unknown whether Sansa told Jon about Theon’s role in her escape from Ramsay Bolton, as there wasn’t an explicit scene in Season 6 or 7 that showed it. Jon and Sansa also don’t have a great track record with actually discussing things.

So, when Jon and Theon meet again, Jon will either be furious on Robb’s behalf, or he’ll be reluctantly grateful for Theon’s part in Sansa’s escape (but still probably mad about Robb).

Either way, the two are hardly bound for a friendly reunion.

Here’s the episode 4 photo of Theon and his men. The signature, recognizable rock-face of Dragonstone is in the background.