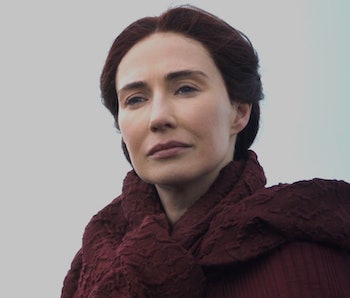 Although Jon Snow and Daenerys Targaryen’s meeting on Game of Thrones was a big deal, there was a quieter revelation in Season 7’s “The Queen’s Justice” that was almost just as long in the making. The episode might have hinted at Varys’s most mysterious secret.

When Varys was a child, a sorcerer castrated him and threw his severed genitals into a fire. Varys then heard a voice in the flames that shook him to his core — but Game of Thrones has never revealed what that voice said. Season 6 came the closest, when Varys encountered the Red Priestess Kinvara. She hails from Volantis, which is where Melisandre said she’s now going in Season 7.

In Season 6, Kinvara appeared to know what that voice said, and Varys clearly found her unsettling. She told him,

Terrible things happen for a reason. Take what happened to you, Lord Varys, when you were a child. If not for your mutilation at the hand of a second rate sorcerer, you wouldn’t be here…knowledge has made you powerful but there’s still so much you don’t know. Do you remember what you heard that night when the sorcerer tossed your parts into the fire? You heard a voice call out from the flames….Should I tell you what the voice said?

Fast forward to the third episode of Season 7, and Varys and Melisandre are chatting on a cliff while Daenerys and Jon meet.

It’s reasonable to assume that Melisandre could also know what that voice in the flames said to Varys. She’s easily as powerful as Kinvara — and likely even more powerful. After all, she resurrected someone, and it’s unknown whether Kinvara has.

Although Melisandre does not directly make reference to Vary’s childhood or the voice he heard in the flames, she does say something very ominous: “I have to die in this strange country. Just like you.”

In response, Varys looks as unnerved as he was with Kinvara in Season 6.

It seems probable that the voice in the flames told him something about the date or nature of his death. Knowing that in advance would be haunting for anyone.

In an interview with Empire on Tuesday, Carice Van Houten said about Melisandre’s future, “we know she has to come back at some point because she said something pretty revealing about her future. It would be a shame to not see her death!”

Looks like we might see Varys’s death too — if Melisandre’s words are accurate. The night is dark and full of terrors for the Spider.

Game of Thrones Season 7 is currently airing on Sunday nights on HBO.