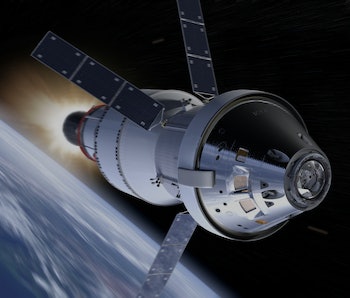 Way back in May, NASA formally nixed an idea that had been floated by the Trump administration as it arrived in the White House. The reasons were fairly straightforward: turning Exploration Mission 1 — the inaugural launch of the upcoming Space Launch System and a robust test flight of the Orion deep space capsule — into a crewed mission, while feasible, would have been much more costly and time-intensive to fit the capsule with the necessary life support systems. However, the announcement was a bit more vague on exactly how NASA came to that conclusion.

That’s changed thanks to a new agency report acquired by BuzzFeed, explaining in greater detail what the original feasibility study found. The new document affirms the notion that NASA could have pulled off a crewed EM-1 flight to the moon by pushing the launch date back to 2020.

“NASA concluded crew could have flown on Exploration Mission-1 (EM- I), provided timely and sufficient funding, with an increased risk acceptance and moving the launch schedule to most likely early 2020,” the report reads.

Of course, the price tag for such a move would have cost about $600 to $900 million more. It’s not quite clear whether the Trump administration would have ponied up that cash, or whether the agency would have been forced to cut funds for other projects and move that money towards EM-1 preparation. Combined with the fact that a crewed mission would have created additional risks, NASA elected to just stick with a robotic mission as planned.

A crewed EM-1 million, the report reads, would have certainly provided a slew of benefits, potentially accelerating human spaceflight plans for the agency moving forward, especially with regards to plans to go to Mars:

“Technically, it removes the operational constraint of a free return trajectory required on EM-2. This would have resulted in a better overall flow of future mission content, presenting an opportunity for acceleration of objectives for all deep space exploration missions slated in the 2020s as we continue to push human presence further into space…Flying crew systems early would have completed non-recurring engineering development activities earlier than currently planned. This would have allowed NASA to move into lower cost production and operations earlier and provide an immediate mission focus we might not otherwise have had.”

Of course, while the arguments make a good case for how much NASA could accomplish if it had more money, it raises other questions as well. As Keith Cowing of NASAWatch tells BuzzFeed, “It does kind of beg the question of why they weren’t doing it this way all along if it was such a great idea.”

On a more positive note, the report ends with a renewed reminder NASA is focused on Mars: “Given the decision not to fly crew on EM-1, NASA continues working toward an uncrewed first flight as the first mission in a series of deep space missions beyond the Moon in preparation for sending humans to Mars in the 2030s.”

Editor’s note 8/1/17: The headline for this story has been updated

More like this
Innovation
Jan. 23, 2023
These 5 futuristic tech ideas could help us explore distant worlds
By Jennifer Walter
Science
Jan. 29, 2023
This nuclear-powered X-ray “flashlight” may help scientists probe the Moon for water
By Andy Tomaswick and Universe Today
Science
Jan. 25, 2023
NASA and DARPA want to build a nuclear-powered spaceship
By Kiona Smith
LEARN SOMETHING NEW EVERY DAY.
Related Tags
Share: