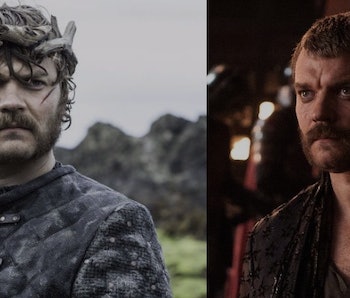 Fans have been questioning Euron Greyjoy’s new suave look in Game of Thrones Season 7, but if actor Pilou Asbæk’s recent comments are any indication, then the radical changes to Euron for Season 7 have everything to do with the calculated manipulations of a total sociopath.

In an interview with HuffPost Friday, Asbæk defended his character’s constantly changing moods and attire, referring to Euron Greyjoy as a “chameleon” in both personality and dress:

“He transforms into the things he wants to be. So when he’s on a bridge with his brother, he acts like the little brother, and he’s got this personality. When he’s at the Kingsmoot, he’s a brute, rowdy, hooligan type. When he’s in the throne room, he’s trying to be seductive, charming. When social media’s going, “He looks like a drunk rock ‘n’ roll guy!” I was like, “That’s exactly what I want!” I want this guy who’s just like, Blehhh! …

When Euron debuted on the show in Season 6, he sported messy hair, an unkempt beard, and wore what looked like rags when he killed his own brother and took control of the Iron Islands. Even his crown was a messy thing made of what looks like moldy driftwood.

But when he showed up at King’s Landing in Season 7’s “Dragonstone” with a fleet at his back and the aim of wooing Queen Cersei Lannister, he did so looking like the drug-addled bassist from your favorite punk rock band — in a good way.

Asbæk explained that its a form of his sociopathic manipulation tactics. Ramsay may have been a 100 percent evil sadist, but Asbæk has told Entertainment Weekly that Euron’s “more like a hooligan” that is “different with different people to get what he wants.”

In clarifying with HuffPost, Asbæk said, “There’s an essence in every single scene that is pure Euron Greyjoy, but he’s different, because all the sociopaths I’ve met in my short lifetime, they are so incredibly socially gifted. It’s unbelievable. They know exactly what to say, when to say it, how to say it — and that’s what I wanted.”

And that, apparently, is the brand of sociopath we’re getting in Season 7 from Euron Greyjoy.

Euron’s hunt for world domination continues on Game of Thrones Sunday at 9 p.m. Eastern on HBO.

More like this
Entertainment
11 hours ago
Teen Wolf: The Movie is fan service done right
By Mónica Marie Zorrilla
Entertainment
Jan. 23, 2023
Dungeons & Dragons trailer is the closest we'll get to playing the real game (with hot celebrities)
By Dais Johnston
Entertainment
Jan. 20, 2023
Legend of Vox Machina will continue — even if Dungeons and Dragons doesn't
By Eric Francisco
LEARN SOMETHING NEW EVERY DAY.
Share: