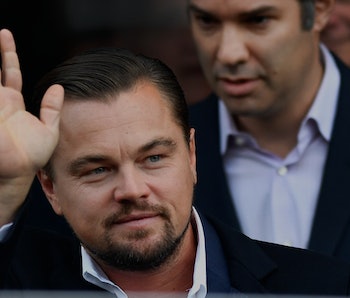 On Tuesday, news broke that Leonardo DiCaprio is teaming up with National Geographic to produce a TV adaptation of The Right Stuff. The non-fiction book, written by Tom Wolfe, tells the story of Project Mercury, NASA’s first human spaceflight program. This move is the latest of DiCaprio’s numerous forays into the science communication realm, which have bolstered his public persona as a climate justice warrior and advocate for science. Unfortunately for DiCaprio, Wolfe’s retelling isn’t exactly scientific source material.

While the book won a National Book Award for general nonfiction in 1980 and received positive reviews from critics, some NASA experts who read it did not feel as positively.

They were particularly unhappy with the way Wolfe portrayed the emergency landing of the Liberty Bell 7 in 1961. NASA describes the accident as a technical problem with the emergency hatch that ultimately caused them to lose the spacecraft. However, Wolfe, whose book focused on the personal stories of the astronauts and their families, portrayed Lieutenant Colonel “Gus” Grissom as “screwing the pooch” when the Liberty Bell 7 crashed into the Atlantic Ocean.

When the book was turned to a movie in 1983, NASA criticized it for similar reasons. Just like Wolfe, the film’s director Philip Kaufman overdramatized the Liberty Bell 7 scene. In 2016, Bill Barry, the chief historian for NASA, told collectSPACE.com that, while he enjoyed the movie, “from a history perspective, it is cringe worthy.” John Glenn, who was a member of the Mercury 7 team, told reporters in 1996 that he didn’t think the film “accurately reflected the people involved in the Mercury program, including me.”

We’ll have to see whether DiCaprio rights the historical wrongs of Wolfe and Kaufman. If he cares to do so, he might want to consider the way the movie Hidden Figures was made: Rather than let artistic license take control of the script, the producers of the 2016 hit film, which is based on a book telling a very different story about the Mercury Project, consulted with Barry and other NASA officials for input. Comparing the two books in an interview with collectSPACE.com, Barry said Hidden Figures was “much better than The Right Stuff, quite frankly.” If DiCaprio and his team are seeking that kind of praise from the scientific community, they might want to hire a fact checker first.

More like this
Science
Jan. 29, 2023
This nuclear-powered X-ray “flashlight” may help scientists probe the Moon for water
By Andy Tomaswick and Universe Today
Science
Jan. 25, 2023
NASA and DARPA want to build a nuclear-powered spaceship
By Kiona Smith
Innovation
Jan. 23, 2023
These 5 futuristic tech ideas could help us explore distant worlds
By Jennifer Walter
LEARN SOMETHING NEW EVERY DAY.
Related Tags
Share: