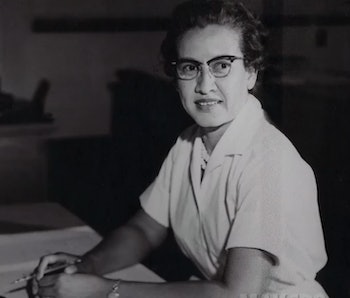 At a recent panel for the movie “Hidden Figures,” actress Taraji Henson told the crowd what it was like to meet the real life Katherine Johnson, the protagonist she plays in film based on Johnson’s life and time working at NASA. “It was like waiting for the queen,” she said. “If I had a teacher like Katherine in school, I could have been a rocket scientist.” Just off to the side, Margot Shetterly, author of the book turned source material, was nodding and smiling. Of all the people involved in the production of the new movie — which serves as a reminder that the “Right Stuff” wasn’t solely possessed by NASA’s square-jawed poster boys — she’s spent the most time with Katherine. She understands the woman behind the math and the math behind one of America’s greatest accomplishments.

Shetterly spent six years on the story of the black female mathematicians who worked at NASA in the early days of the space program. The film focuses on three of these women in particular: Johnson, Dorothy Vaughn, and Mary Jackson, who worked as “computers” before NASA used actual computers — and after that. These women were well known within the agency, but received little recognition outside of it. The late astronaut John Glenn refused to orbit Earth until Johnson checked the math of the computers that calculated his vector.

Inverse recently sat with Shetterly to talk about the power behind the story of these women and the importance of discussing science in 2016.

Why do you think that 2016 is a particularly important time to tell this story?

There are many reasons. First of all, the idea Katherine Johnson is with us and has been able to see her legacy cemented in this way, in the book and on the screen. I’m so thankful that this is happening, and she’s been able to see it.

I’m also glad that this story is being told in, I think, a time where there is a conversation going on about how we can get more underrepresented minorities into science jobs. This has been an issue for a long time, and I think perhaps by looking at the their stories [the women in the film] and thinking about these issues of inclusion, there is a lot that we can learn for today.

There were hundreds, perhaps more than a thousand women, doing work as professional mathematicians at one level or another. Starting in 1935, there were five women who started at the Langley Research Center. The first five black women started working there in 1942. They stayed on the job through World War II, the Cold War, the Space Race. Many of them who continued working there were able to move up through the ranks. What do we learn from that for today? How do we take their existence and convert it into policy results for today?

How long have you wanted to tell Katherine’s story?

This process really started six years ago. That’s when I started working on the book. Three years were just research. I had to give myself a mini crash course in aeronautical engineering to understand enough of what it was that they were doing.

It has been incredible to hear positive feedback from the people, like Katherine, who were closest to the story.

Do you think storytelling is a particularly powerful way of addressing those questions?

Yeah, I have to say that my background is that I started out as an investment banker, then I worked in internet media, and since then I’ve been kind of an entrepreneur. So it has been an eclectic career, and now I find myself a writer. But I have always loved science. My dad is a research scientist and so I’ve always felt a passionate love for NASA and its mission. I’m very grateful for the support that the people at NASA have given me for this project. The research they provided has been critical for the production of the book and the movie.

But to that point, I really do hope that the enthusiasm for the book and the movie will further encourage people to support science and the role it plays in our lives. I don’t think we can underestimate government support science. The projects pursued by NASA in its earliest days were so big that they required the support of the federal government. It would be lovely if the book and movie could result in budget implications for NASA. I think it is important — NASA does a lot of basic science as well. For example, my dad is an atmospheric scientist. He is involved in basic, fundamental scientific research that has a lot of implications for climate change. It’s important that this work continues.

From your research, did you find that the women that we see profiled in the film — Katherine Johnson, Dorothy Vaughn, and Mary Jackson — saw a connection between their own work and the advancement of civil rights?

Absolutely, there’s no question. They saw a very direct result. Their attitude was, “We’re here, we are doing this work, and we are helping our country advance because we are also opening the door for people like us.” Black women and women more broadly. They realized that everything they did would have an implication for future women.

The 1960’s were a very turbulent time but there was also a sense of optimism in the Civil Rights movement, in the space program, and in the gender equality movement. There was a shared hope for finding a common humanity that overcame all of the obstacles. That wasn’t an accident.

There has been consider progress from Katherine Johnson working as a “computer” to Stephanie Wilson, who was the second black woman to go to space. Do you think that there are still certain hurdles that exist for women working in space programs?

I do think so. I’m not working in the space program, so I think that question is probably best answered by those women. But I think there is more progress to be made. I really hope that what this film and the book does what they can do is sort of perhaps challenge us to change our point of view, so that we can have a little more imagination, look at anyone and perhaps say, “Well that person might be a scientist.”

There are women working in the space program. There are black women working in theoretical nuclear physics — they’re people from all backgrounds working in all these fields. Even so we’re still not seeing the people are there, there is a problem with visible representation. There’s still this perception that Einstein is the default setting for scientists. That couldn’t be farther from the truth. I think maybe step one is seeing these people and documentation creates visibility. I hope this movie does a lot for that.