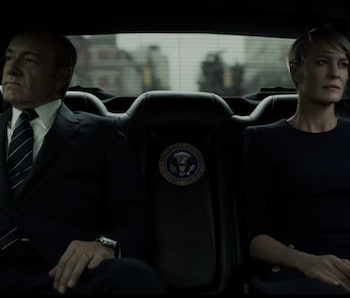 Netflix is a fat, content-rich spider at the center of the World Wide Web. Here's the streaming company's Internet dominance by the numbers:

37 percent: The proportion of North American Internet traffic Netflix is responsible for, according to a report released by bandwidth managing firm Sandvine on Thursday.

4: How many Marvel shows taking place in Hell's Kitchen that will air on Netflix, according to a deal struck in 2013. Daredevil roundhouse-kicked off a series also including Jessica Jones, Iron Fist, and Luke Cage.

50: The approximate number of countries where you can stream Netflix. The company is shooting for 200 by the end of 2016 — including the notoriously tough to tap into China.

6 million: The number of people who still received Netflix DVDs by mail, as of June 2014.

57.4 million: The total number of Netflix subscribers worldwide in January 2015. Doesn't include all those people who also have your password and have tricked Netflix's algorithm into thinking you'd enjoy Scrubs.

10 billion: The number of hours people streamed Netflix between January and March 2015. That's about 2 hours of TV a night per subscription.