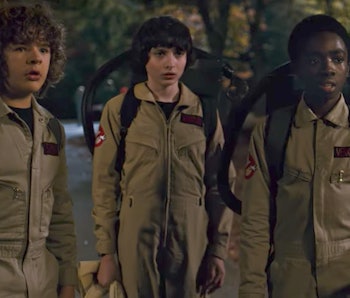 The new trailer for Stranger Things season 2 features our lovable young heroes — Dustin, Mike, Lucas and Will — all rocking original 1984 Ghostbusters Halloween costumes. And if you look closely, their proton packs and ghost traps are clearly homemade. And that’s because there weren’t officially-licensed Ghostbusters toys in 1984. Meaning, that duct-tape version of the famous ghost trap in the new trailer is pretty historically accurate.

Because the beginning of the first season of Stranger Things takes place in 1983, the boys hadn’t seen Ghostbusters at that point. The movie didn’t come out until June of 1984. So, presumably, the four of them all went to see the movie the summer after the school year Will was missing in the Upside Down, and instantly required their parents to help them get Ghostbusters costumes together for that following Halloween. (It seems a little odd that Will would be into a movie with demonic and alternate universe imagery after his traumatic experience, but whatever.)

Still, Ghostbusters wasn’t marketed as a full-on children’s brand until 1986 when the cartoon The Real Ghostbusters hit TV screens. So, in 1984, if you wanted to make a Ghostbusters costume, you’d have to do it from scratch. And if you dig around the internet a little, you’ll discover there was an officially licensed clothing pattern parents could order to make the jumpsuits.

Meaning, even though the boys have great-looking jumpsuits in the new trailer, even those weren’t store-bought, they had to be partially homemade. As Peter Sciretta of Slashfilm pointed out in February “I remember the Halloween costumes looking much shittier when I was a kid growing up in the 1980’s.” So, the only legit explanation for why the boys have such great-fitting jumpsuits is their parents are all really good at making bespoke clothes from patterns they ordered by mail.

Interestingly, there were never actual Ghostbusters movie-style proton packs and ghost traps toys in the 1980s. The proton packs and ghost traps that were eventually released were based on the designs of the gear from the cartoon, not the movie. Mostly this means the packs and traps were blue, not black, and overall looked less hardcore. That toy version of the proton pack didn’t come out until 1987. Which means, by the time the Stranger Things kids could buy them, they would be like driving age.

But, because the ghost trap looks clearly homemade, and fake, we can be assured that Dustin, Lucas, Mike and Will are truly original, and pioneering Ghostbusters fans, with really, really awesome parents.