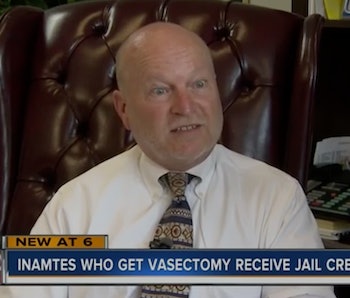 A judge in Tennessee is offering inmates 30 days of credit toward jail time if they get long-acting or permanent birth control — and it’s unclear who’s funding the treatments.

Judge Sam Benningfield told Nashville’s News Channel 5 that he hopes the procedures — Nexplanon implants in women, which can prevent pregnancies for up to four years, and permanent vasectomies in men — will “encourage them to take personal responsibility, and to give them a chance when they do get out not to be burdened again with additional children.”

“Offering a so-called ‘choice’ between jail time and coerced contraception or sterilization is unconstitutional. Such a choice violates the fundamental constitutional right to reproductive autonomy and bodily integrity by interfering with the intimate decision of whether and when to have a child, imposing an intrusive medical procedure on individuals who are not in a position to reject it. Judges play an important role in our community — overseeing individuals’ childbearing capacity should not be part of that role.”

Nexplanon is a highly effective, fairly low-risk, and reversible form of birth control — though removing it early requires a minor surgery that can cost $100.

Vascectomies are generally permanent, though surgeries exist that attempt to reverse them. A reversal has between a 40 percent and 90 percent chance of success and can cost more than $10,000.

It’s not immediately clear who’s funding the arguably coerced procedures, which 32 women had received and 38 men are still waiting to receive.

Inverse spoke with Marla Neal, Bennington’s secretary. During the conversation a man’s voice could be heard in the background saying loudly that the funds come from a federal grant and that “they’re available to everyone.”

Neal first referred Inverse to the Tennessee Department of Health for further information, which provided this statement:

Family planning services are among the core public health services we provide at all of our county health department locations. These services are available to all patients who request them, and are provided on a sliding fee scale based on income.

We are not aware of any specific program designed to fund family planning services for incarcerated individuals.

Neal later referred Inverse to Nancy Sibley, a nurse practitioner with the White County Health Department, and Donald Grisham, a doctor with the Cookeville Regional Medical Center, who she said are involved in the procedures. Neither immediately returned Inverse’s calls.

Philip N. Cohen, a sociologist at the University of Maryland and expert in issues of family and social inequality, told Inverse that lack of access to effective, long-term birth control is a real problem for poor people in the United States, but that Benningfield was approaching the issue in the wrong way and for the wrong reasons.

“Without making too much of one crackpot judge,” Cohen said, “it does show a whole way of thinking about people who are considered undesirable by authorities or people in power; that if only they had fewer children they’d have fewer problems. In that sense it’s really like eugenics.”

While Benningfield’s program doesn’t target people explicitly for imagined problems with their genetics in the way of historical eugenics programs, Cohen said, it does suggest that social problems would be reduced if “undesirable” people had fewer children.

“That’s not really true, and it’s no way to reduce any actual social problems,” Cohen said.

If White County wanted to actually improve the lot of prisoners and their families, Cohen said, it could start with job programs, drug rehabilitation — and real, comprehensive medical programs.

The fact that so many incarcerated people signed up for long-term or permanent alterations to their bodies in return for just 30 days off their sentences, Cohen said, “suggests there is a real problem with lack of access to reproductive health care.”