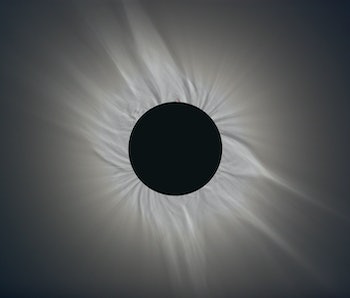 The sun is a million times brighter than its own atmosphere, known as the corona, which means it’s normally impossible to see it with the naked eye. The elusive corona only becomes visible during a total solar eclipse, when the moon completely obstructs the sun and its profound light radiation, allowing the corona’s usually faint wisps to appear around the dark moon.

To best observe the sun’s ghostly atmosphere, European Space Agency (ESA) researchers are preparing to send two satellites into Earth’s orbit in 2020 to create an artificial total solar eclipse, a rendering of which they released this week and is shown below. The twin formation, called Proba-3, will position the satellites nearly 500 feet apart. One satellite will “eclipse” the sun from the other’s vantage point, giving the second satellite a constant view of the sun’s atmosphere.

The satellites must be almost perfectly aligned to produce the sunlight-blocking effect. They must stay within a single millimeter of the correct alignment, all while remaining a constant 500 feet of separation in Earth’s high orbit. Compounding this challenge, the satellites must maintain this nearly perfect positioning while racing around Earth at speeds of over 21,000 miles per hour.

“It is like shooting an arrow from 150 meters away and trying to get to the center of the target within 1 millimeter,” said ESA System Engineer Andrea Santovincenzo in a statement. “It’s extremely challenging.”

It will be the closest alignment between two spacecraft ever achieved. Other types of spacecraft alignment require close precision, such as when a supply craft rendezvouses with the International Space Station to drop off astronauts and supplies. But that only requires accuracy to within a centimeter, which is 10 times less precise than Proba-3’s positioning.

Understanding the corona’s unpredictable behavior is of profound importance, not just to scientists but the whole of society. The sun’s inner corona is indescribably hot — hitting temperatures of a few million degrees — and this swirling flow of heat and energy releases an unpredictable solar wind. The stream of charged particles can slam into Earth, wreaking catastrophic havoc on our electrical systems. which has motivated governments to make forecasts about when the corona might blast the planet with a ruthless solar wind. The National Academy of Sciences predicts that a massive solar wind event could without warning paralyze the eastern seaboard, wiping out power for a year. NASA, for instance, will launch the heavily-armored Parker Solar Probe into the outer corona in 2018.

If Proba-3 can successfully pull off a fake eclipse, it won’t just improve our understanding of the corona’s mercurial behavior. It will also prove that a fleet of two or more smaller satellites can do the work of one massive satellite. Proba-3 doesn’t have to be 500 feet long. It just needs to be nearly perfectly aligned, a precision that European Space Technology and Research Center head Franco Ongaro compares to the fine nuances of two-skilled dancers.

“Proba-3 will set a new pair of eyes on the sun and a new way of designing a space mission,” he says. “So let’s dance.”