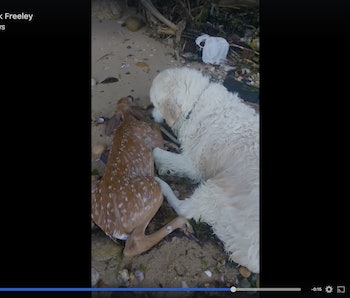 On Sunday, an English golden retriever named Storm performed a courageous feat of unbearable sweetness. When this angel of a dog, whom we do not deserve, spotted a fawn struggling in the waters off the New York coast, he immediately swam to the rescue. Most humans, with their petty hearts and weak wills, wouldn’t know what to do. But Storm is not like us. Storm leapt into action.

While Storm comes from a line of literal retriever dogs that can be trained to retrieve injured animals, his heroic rescue is still a remarkable display of interspecies friendship, which scientists still can’t fully explain.

Freeley posted a video of the daring rescue to his Facebook page, where it’s gone viral, amassing over three million views as of this article’s publication.

Feel free to take a moment to wipe the tears from your eyes.

Now that we’re all done crying, let’s talk about why this is so cool. Interspecies friendships seem so magical because they thwart common sense notions of predator and prey. It’s not unreasonable, after all, to think that a wild dog would turn a helpless fawn into lunch (“My dog would’ve made some stew out of the fella,” said one Facebook commenter on Freeley’s video).

Some scientists might suggest that Storm didn’t think to kill because he simply wasn’t hungry. In an interview with The Atlantic about an unlikely tiger-goat relationship at a Russian zoo, University of Tennessee psychologist and ecologist Gordon Burghardt, Ph.D., explained that interspecies bonds are possible when the predator’s nutritional needs are already met. That’s why, he explained, we see so many of these friendships happen to animals in captivity. The implication is that if Storm were a less well-fed dog, he very well might have reacted differently.

But his lineage also makes a big difference in how he reacted to the helpless deer. Storm is a golden retriever, a dog breed that belongs to the group known as “sporting dogs.” This means he comes from a line of dogs that was specifically bred to assist hunters by retrieving ducks and other fowl after a hunter shot them out of the sky, and it’s thought that their retrieval behaviors are, at this point, instinctual.

The dogs are particularly good swimmers. So even though this fawn is much bigger than the average duck, Storm’s instincts appeared to kick in, and he gently retrieved the struggling baby from the water, just like his ancestors retrieved waterfowl in the Scottish moors 150 years ago.

Still, the fact that he didn’t appear to injure the deer is remarkable, as many retrievers must be trained not to clamp down too hard on their quarry, destroying the meat and feathers (it’s not clear whether Freeley had done so). The epic rescue would have been less surprising if Storm was a female: Male animals have been known to kill their own kids in times of need, whereas female animals are known to care for and even adopt the young of other animals. Not only did Storm not kill the fawn, but he exhibited behavior that is more often observed in female dogs.

So in this case of interspecies friendship, we see Storm the golden retriever defying gender norms and leveraging his unique breed characteristics to give us a tender respite from this cruel world.