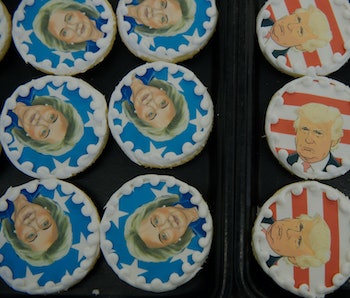 On Monday, Tropical Storm Don took shape near the Caribbean in the Atlantic Ocean. That the storm shared a name with the sitting president seemed worthy of some snickering.

Then news came Tuesday of another tropical storm forming, this time in the Pacific. If it emerges, its name will be Hilary.

In other words, Hilary might soon be opposite Tropical Storm Don.

Right now, the air mass that could become Hilary hasn’t become a full fledged tropical storm, and forecasters are still somewhat doubtful that that’s going to happen. But just as Don got its name from the official list after becoming the fourth named Atlantic storm of the hurricane season, Hilary would be the eighth named Pacific storm of the season, and “Hilary” is the eighth name on the official list.

“Hilary” and “Don” aren’t some kind of weird meteorological political commentary, by the way. They’re drawn from a repeating list created by the World Meteorological Organization years in advance. Names only fall off the list if they become attached to particularly damaging storms, like Katrina.

The National Hurricane Center’s forecast notes that the low pressure system, located about 800 miles southwest of the tip of Baja California, isn’t perfectly positioned to develop into a full-fledged storm. However, “only a small increase in the organization of this system could lead to the formation of a tropical depression at anytime.”

The NHC puts the odds of that happening in the next 48 hours at 80%.

Not-quite-Hilary is sandwiched between two other storms, Hurricane Fernanda and Tropical Storm Greg — both of which are moving harmlessly away from major landmasses at the moment.

Unlike Don, Hilary doesn’t seem to pose any immediate danger to the public.