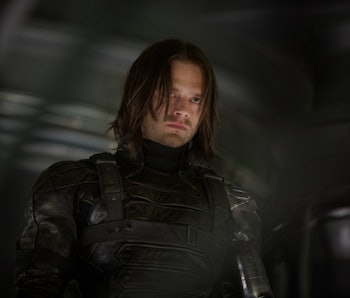 Fans who had hoped for an addition to Winter Soldier’s saga prior to Avengers: Infinity War are in for a disappointment. Sebastian Stan, the actor who played Bucky Barnes (alias: “Winter Soldier”) in Captain America: Civil War, announced on Good Morning America on Monday that he won’t appear in Black Panther.

Spoilers for Captain America: Civil War are below.

In Civil War, Bucky Barnes has partially emerged from a brainwashed state — he’d been manipulated and controlled by the terrorist organization Hydra — but still returns to that state when he hears trigger words and is on the run. After a final fight against Iron Man alongside Captain America, Barnes voluntarily enters cryogenic sleep until a complete cure for the mind control can be found.

“I can’t trust my own mind,” he says. Black Panther and Captain America watch silently as he is put on ice.

It’s definitely a cliffhanger, which is why so many fans hoped to see Barnes back in Black Panther. That includes the Good Morning America host.

“But you were on ice in Wakanda!!” the host protested, to which Stan said that Bucky Barnes’s predicament does get “resolved” in Infinity War. That’s good, at least; it would have been baffling if Stan had been billed as part of the movie but appeared in a purely frozen capacity.

Of course, King T’Challa (alias: “Black Panther”) will return to Wakanda, his home, in Black Panther. We just won’t catch sight of Bucky Barnes there; he’ll be tucked away in that Wakandan facility — out of sight, out of mind. For now.

“After the events of Marvel’s Captain America: Civil War, King T’Challa returns home to the reclusive, technologically advanced African nation of Wakanda to serve as his country’s new leader. However, T’Challa soon finds that he is challenged for the throne from factions within his own country. When two foes conspire to destroy Wakanda, the hero known as Black Panther must team up with CIA agent Everett K. Ross, and members of the Dora Milaje, Wakanadan special forces, to prevent Wakanda from being dragged into a world war.”

It looks to be a dope movie, and really has no need for the White Soldier.