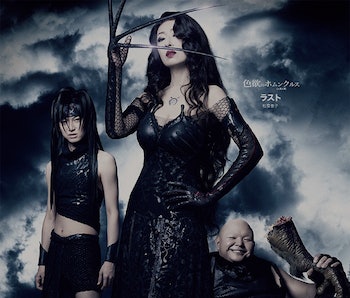 Warner Bros. Japan has released the first full trailer for the upcoming live-action adaptation of beloved manga and anime Fullmetal Alchemist, and it features a first look at the villainous homunculi and other members of the supporting cast.

The trailer also offers an early look at their childhood friend and mechanic (for Ed’s robotic arm and leg) Winry Rockbell. There’s also their superior, Colonel Roy Mustang, whose specialty is explosive fire alchemy with a snap of his fingers, and other members of the military, Maes Hughes and Riza Hawkeye.

The three homunculi featured are Lust, Envy, and Gluttony, each of which is terrifying. The disturbingly sexy Lust has retractable claws for fingers that can impale her enemies at great distances. Envy has a grimace of disgust and is an overwhelmingly fast and strong street fighter. Gluttony devours anything he encounters, whether an inanimate object or a living being, and his soulless eyes don’t do him any favors in the looks department.

In Fullmetal Alchemist, these mysterious characters named after some of the deadly sins are the principal villains for much of the series. Their enigmatic nature and mysterious goals frustrate Edward and Alphonse Elric, the maimed brothers at the center of the story.

Check out the trailer right here:

Long before the story starts, Ed and Al tried to use forbidden alchemy to resurrect their dead mother. The unsuccessful result caused Al to lose his entire body and Ed to lose an arm and a leg. Their story is largely a quest to gain the power needed to restore their bodies.

The trailer does a few things right, like showing how cocky the elder brother Ed can be, putting both his alchemy skills and automail arm on display. But Al — a disembodied soul stuck inside an empty suit of armor — is rendered entirely in CGI and looks almost as bad as the bursts of fire created by Mustang.

It’s for these reasons and more that fans are less than thrilled about this upcoming adaptation, but plenty are bound to see it anyway when it hits theaters in Japan on December 1.

For a closer look at the three homunculi, check out the latest character poster: