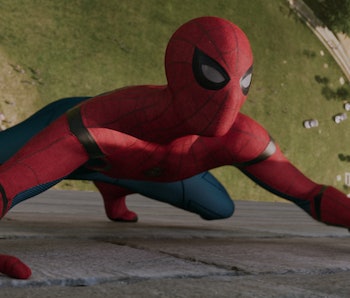 Thanks to his youth and enthusiasm, Spider-Man: Homecoming star Tom Holland has been praised by fans and critics alike for creating the most accurate portrayal of Peter Parker yet. And thanks to his natural athleticism and background as a dancer, the 21-year-old actor also physically embodied the wall-crawler in an unprecedented way.

Holland spent much of his youth working as a gymnast and dancer, including years performing on the London stage in the West End production of Billy Elliot. So, when he was on set at Atlanta’s Pinewood Studio, where most of the Jon Watts-directed movie was shot, Holland put his skills to good use. While an actor performing in a motion capture suit is old hat by now, it’s rare that the stars wearing them are asked to perform any kind of complicated or taxing physical stunt. Andy Serkis prowls around on his knuckles in the Planet of the Apes movies, and Mark Ruffalo throws stuff as the Hulk, but Holland took it to the next level.

“He can actually do backflips, twisting flips, and things like that. We would do performance capture on him — we’d have him jump, and we’d hook him up to wires and have him leap around,” Theo Bialek, one of the film’s VFX supervisors, told Inverse. “We tried to use the pieces in that performance as animation on a performance capture. We were able to use so much of his runs. He would jump off of balance beams, be pulled on cables, and so much of what he did was usable.”

As Bialek explains, the first two Spider-Man series featured an entirely CGI-generated web-slinger during all action scenes. So while Tobey Maguire and Andrew Garfield each did commendable jobs as Peter Parker, and looked good in the Spidey suit, they didn’t have all that much to do with the actual performance of being Spider-Man, other than some practical stunts on set. This time around, a combination of Holland’s athletic ability and the advances in VFX technology allowed Homecoming to integrate the young star’s physical movements into computerized action, as well.

Bialek estimates that 30 percent of the fights and stunts done by Spidey on-screen were derived from motion capture, based on Holland’s high-flying moves, as well as some by his stunt man, and occasionally, some animators in the studio.

“We picked the best pieces of each performance, then graft it together into one model that’s animated with the best bits of each one of their performances,” Bialek, who is a full-time VFX supervisor at Sony Pictures Imageworks, said. “And then from there, we were able to actually start hand-animating by matching our Spider-Man into the key poses of the performance they did.”

And that 30 percent is actually a bit of a low estimate, because it doesn’t include the action that was inspired by Holland’s physical mannerisms, or as Bialek called it, based on “extensive reference” to existing performances.

“If we didn’t do direct capture, we still observed how he catches himself when he’s off balance,” Bialek explained. “He kind of re-corrects or windmills his arms when he’s in the air. And he could do a standing back flip. All that stuff is just so valuable, ‘cause you catch all those nuances that’s supposed to be him. I think just the fact that he had the athleticism allowed us to actually not have to guess what Spider-Man, or what Tom Holland would look like, if he were doing something more crazy.”

It also helped that Holland was supposed to be portraying a somewhat awkward young Spider-Man, who is just learning how to harness recently acquired powers. Meanwhile, computers are now capable of rendering just about anything, especially when it comes to fantastical action scenes and feats of superhuman physicality. So the post-production crew actually had to temper their instincts and tools, and having Holland as a reference was helpful in that regard, as well.

“That’s probably one of the most challenging things for us to do, is to try to avoid going to the gut reaction of, ‘go into a Spider-Man iconic pose,’ when, in reality, maybe he wouldn’t do that necessarily, right?” Bialek said. “And the jumps wouldn’t be as fantastical as you’re used to seeing in the comic books… the good thing was that he could do a lot of stunts himself.”

More like this
Entertainment
Jan. 19, 2023
Ant-Man 3 interview proves Marvel is taking the wrong lesson from Jodorowsky’s Dune
By Ryan Britt
Entertainment
Jan. 17, 2023
Guardians of the Galaxy 3's Adam Warlock reveal may be a big misdirect
By Eric Francisco
Culture
Jan. 28, 2023
Sci-fi legend René Laloux’s final movie is his most opaque — and maybe his best
By Jake Kleinman
LEARN SOMETHING NEW EVERY DAY.
Related Tags
Share: