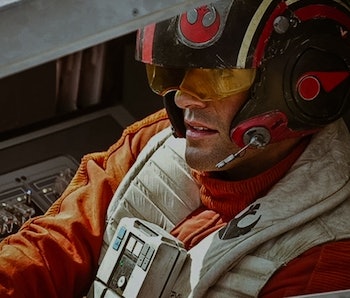 The best X-Wing pilot in the Resistance almost didn’t make it out of The Force Awakens alive, but in terms of a numbers game, getting into an X-Wing cockpit is statistical suicide. Because the probability of X-Wings blowing and/or crashing in a given Star Wars movie is so high, Poe Dameron might be living on borrowed time. Basically, the numbers tell us that X-Wings are death traps.

On Thursday, a fan theory surfaced on The Christian Post that Poe Dameron will die in The Last Jedi. To be clear, this is just a rumor created by speculation, but it does have some solid logic behind it. J.J. Abrams and Poe actor Oscar Isaac have gone on record numerous times saying that early versions of The Force Awakens would have killed off the popular pilot early in the film. But beyond creative choices from Abrams or Rian Johnson, the mortality rate for X-Wings alone could easily claim the life of Poe Dameron.

Rumblings about Poe’s possible Last Jedi death led us to do some quick math as to what the chances are of an X-Wing blowing up or crashing in a Star Wars movie. If we assume that an X-Wing squadron consists of 12 ships, then only 2 X-Wings survive Star Wars: A New Hope; the ones piloted by Luke and Wedge. In The Empire Strikes Back, we counted 7 total X-Wings, including the one that Luke flies to Dagobah and crashes. In the darkest original Star Wars movie, X-Wings do pretty good. The only one that crashes is Luke’s. So that’s 6 out of 7 X-Wings that don’t crash or blow-up.

Return of the Jedi is a little tricker, but assuming Wedge’s Red Squadron is also made up of 12 ships, it seems like everyone bites it, except for Wedge and two other ships. This isn’t as iron clad as the other films, since there are so many ships flying around. But, because we see those 2 X-Wings delivering fireworks while the Ewoks are dancing, we’ll count those as being from the same squadron. And since Wedge is partying down below, we’ll assume he flew his X-Wing down. That means 3 of the 12 X-Wings in Return of the Jedi survived.

Finally, we’ve got the X-Wings in The Force Awakens. Notably, the very first X-Wing we see in the movie — Poe’s special black one — is totally blown-up by the First Order. The next time we see X-Wings is when Poe and Black Squadron show up on Takodana to save the day. As far as we see, not a single X-Wing blows up here. We’re assuming this is 12 X-Wing squadron, Poe’s special “Black Squadron.”

But, things aren’t so great for X-Wings by the end of the The Force Awakens. In the attack on Starkiller Base, it seems like there are 3 X-Wing Squadrons. Poe mentions “Red and Blue squadrons,” but seems to imply that his squadron is different. So that’s Black Squadron, probably. Meaning, there are 36 X-Wings attacking Starkiller Base. But, the Resistance gets hammered here. In fact, we only counted 7 X-Wings flying out of the explosion of Starkiller Base at the end. Of course, others could have made it, but it seems like we’re meant to think very few ships survived. With that in mind, if we count Poe’s X-Wing that gets destroyed on Jakku, that’s only 7 out of 37 X-Wings that survive The Force Awakens.

What does it all mean? Basically, of 92 possible X-Wings (from A New Hope, The Empire Strikes Back, Return of the Jedi, Rogue One, and The Force Awakens) 68 are destroyed or crashed. That means there’s a 74 percent chance that an X-Wing will be destroyed or crash in a Star Wars movie that has X-Wings in it.

We know Luke Skywalker is basically gaming the system because he’s got the Force and everything. But guys like Wedge and Poe Dameron are, right now, just very lucky.

Will Poe’s luck hold in The Last Jedi? If he gets into an X-Wing, he’s got a 74 percent chance of crashing it and/or blowing up and probably dying. Maybe it’s good that we see his X-Wing getting blown up before he can get inside of it in the trailer.