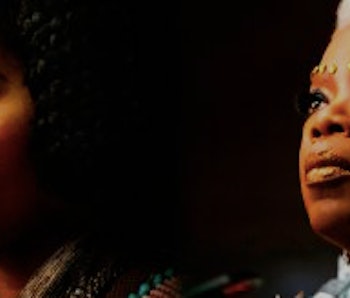 Get ready to tesseract! The first photos of Mrs. Whatsit, Mrs. Which, and Mrs. Who from the Wrinkle in Time movie are here. For fans of time travel epics, who are disappointed that a female Doctor Who hasn’t been announced, these three time travelers are basically better anyway.

On Wednesday, Entertainment Weekly released a slew of photos from the Ava Duvernay-directed film adaptation of Madeleine L’engle’s classic science fiction novel, A Wrinkle in Time. In the story, the enigmatic characters of Mrs. Whatsit, Mrs. Which, and Mrs. Who take Meg Murry (Storm Reid), her brother Charles Wallace Murry (Deric McCabe), and friend Calvin(Levi Miller) on an adventure that transcends time and space. Gugu Mbatha-Raw and Chris Pine and will play Meg’s parents; the missing scientists who set the whole story into motion.

But the big news is easily the first glimpses of the three heroic time travelers —Mrs. Which, Mrs. Whatist, and Mrs. Who, as played by Oprah Winfrey, Reese Witherspoon and Mindy Kaling respectively. And they all look great. In the book, these characters are revealed to normally look like winged centaurs. Sadly, photos of the characters in those guises haven’t appeared…yet.

More like this
Entertainment
Jan. 31, 2023
Dune 2 Will Be Hilarious, Says Actor Whose Character Killed His Own Dad
By Ryan Britt
Entertainment
Jan. 26, 2023
Attack the Block sequel will take a page from the two greatest sci-fi sequels, director says
By Eric Francisco
Culture
Jan. 28, 2023
Sci-fi legend René Laloux’s final movie is his most opaque — and maybe his best
By Jake Kleinman
LEARN SOMETHING NEW EVERY DAY.
Related Tags
Share: