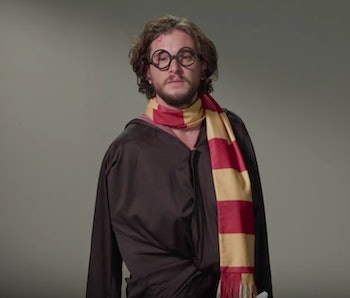 Jon Snow is awful at playing Cersei Lannister, Arya Stark, and Daenerys Targaryen — but he makes a surprisingly great Harry Potter. On Monday Kit Harington appeared on Jimmy Kimmel Live, where he revealed fake audition tapes for alternate Game of Thrones characters. He also snuck in Harry Potter at the end — and the King in the North makes a solid case for himself as the Boy Who Lived.

Jimmy Kimmel introduced the segment as “exclusive never before seen Kit Harington screen tests.” The scene then cut to Harington’s “auditions” for characters like Cersei Lannister, where Harington mispronounced her name, donned a wig and said, “now if you’ll excuse me, I need to have sex with my brother.”

For his “audition” as Daenerys Targaryen — who is Jon Snow’s newly revealed aunt — Harington donned a different wig and took off his clothes to reveal fake breasts, poking fun at the frequent internet buzz around nudity on Game of Thrones.

At the end, however, he posed as Harry Potter, arguing with the unseen “casting director” that the Chosen One should be in Game of Thrones. Although it was a joke, with his naturally unruly hair and smirk, he made an inadvertent case for himself as an adult version of the wizard.