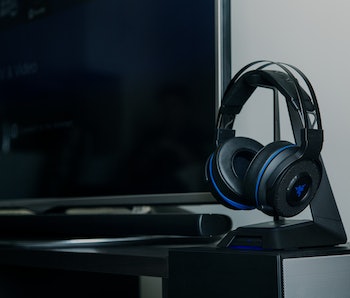 In competitive gaming, the quality of sound output can literally mean the difference between life and death. That’s something Razer had in mind when they designed their new Thresher Ultimate Gaming Headset, the company’s first foray into console audio accessories.

Gamers get the optimal gaming experience when they can utilize a headset that blocks out exterior noise while delivering dynamic sound directly into your ears. In the ideal world, you get a blend of comfort, quality, and range. That’s what Razer’s new headset aims for and excels at, and it comes at a retail value of $249.99.

These over-ear headphones have a complicated series of interconnected pieces involved in getting everything up and running that, after initial setup, is easy enough to manage — and it’s more than worth it for the quality of the product, especially considering it can also function connected to your PC.

So whether you’re in it for communicative gaming or just watching high-intensity action movies while not trying to bother your roommate(s), they offer a comfortable headset experience.

The Razer Thresher does a lot of things right when it comes to sound, chief among them its use of a low-frequency range to offer up a more nuanced, immersive, and premium audio experience.

The player hears sounds from the in-game direction they originate from. Particularly when playing a game like Overwatch, for instance, where enemy footsteps can let you know when you’re being flanked, the Razer Thresher truly excels. With other headsets or just the native audio from TV or speakers, you can hear footsteps in Overwatch, but it’s often virtually impossible to discern what direction they’re coming from. With the Razer Thresher, you can clearly hear if the noise is coming from above, behind, or just off to one side.

That high-quality sound largely comes from a direct optical cable that runs between your console and the 7.1 surround sound audio hub:

There are no lapses in connection when it comes to jerky movements due to the dual antennae which also helps keep the upper range of distance up to 40 feet. And with an extended battery life of up to and, at times, beyond 16 hours, you hardly ever need to charge it.

Both input and output volume controls are dials on either ear piece, and pressing either in allows the wearer to instantly silence noise or to mute themselves. If there is one complaint, it’s that the sound dials can be easily slid down on accident; I’ve gotten a lot of complaints from people I’m playing with that my voice is too quiet and faint, which makes it necessary to go into the PS4 system settings to manually adjust the volume output. It’s not a huge problem or hassle, but it’s an extra step users have to take.

Especially when compared to something like the standard PlayStation Gold Wireless Stereo Headset, the “leatherette, the lightweight memory foam ear cushions” offered by Razer Thresher is incredibly comfortable. For players with heads that overheat in the thick of battle, the Razer Thresher has a bit more breathing room, whereas the PlayStation Gold Wireless can get oppressive very quickly.

A lot of the comfort comes from the lighter weight of the headset itself. Wearers who might happen to have larger heads can sometimes struggle to find a larger headset that doesn’t feel too tight. The Razer Thresher is firm without being too constricting — and it’s adjustable — which can make all the difference for some gamers. Another added perk is the fact that each of the ear cups can rotate at slight angles to better fit head shapes. With Sony’s Gold Headset, what you see is what you get.

The microphone is both retractable and capable of being maneuvered into specific positions closer or further away from the wearer’s face, allowing for maximum comfort.

Impressively, the Razer Thresher doesn’t have to sacrifice efficiency for comfort, and it appears to be even better than the PlayStation Gold Wireless headset at canceling noise. Ultimately, it should be most people’s top choice if they’re in the market for a more pricey premium headset for console gaming.

More like this
Gaming
3 hours ago
Overwatch 2 support players are finally getting some respect
By Robin Bea
Gaming
16 minutes ago
15 huge video games coming in the second half of 2022
By Robin Bea
Gaming
6.30.2022 6:30 PM
Genshin Impact fans urge developers to add more melanin to the game
By Jess Reyes
Related Tags
Share: