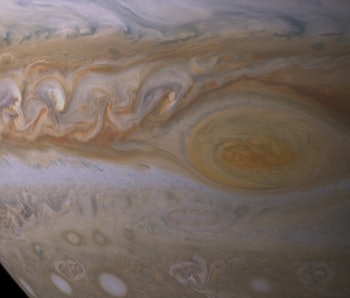 In the early hours of July 11 (1:55 a.m. Eastern), NASA’s Juno spacecraft will fly 5,600 miles above Jupiter’s famed Great Red Spot, a cyclone twice the size of Earth. NASA calls the storm “a swirling mystery,” and this 12-minute flyby will give scientists their closest view ever of the nearly 200-year-old storm.

Juno arrived at the gas giant Jupiter in July 2016, and since then it has zipped around the planet in a manner devised to bring it perilously close to the planet’s cloud tops. The July 11 swoop will be Juno’s sixth close encounter in the past year.

“Jupiter’s mysterious Great Red Spot is probably the best-known feature of Jupiter,” said Scott Bolton, principal investigator of the Juno mission, in a statement. “This monumental storm has raged on the solar system’s biggest planet for centuries. Now, Juno and her cloud-penetrating science instruments will dive in to see how deep the roots of this storm go, and help us understand how this giant storm works and what makes it so special.”

So far, Juno’s efforts to help scientists (and humanity more generally) understand what’s happening in Jupiter’s roiling atmosphere has led to more bafflement. After images from an earlier fly-by came back, Bolton had this to say:

There is so much going on here that we didn’t expect that we have had to take a step back and begin to rethink of this as a whole new Jupiter.

The scene inside Jupiter’s poles, for instance, is unfettered chaos. There are countless hurricane-like storms that appear to be colliding with each other in the south pole. But the south pole looks different from the north pole, and scientists don’t know if these are long-lived storms — like the Great Red Spot — or younger, rapidly forming and rapidly dying tempests. “Are we seeing just one stage, and over the next year, we’re going to watch it disappear, or is this a stable configuration and these storms are circulating around one another?” asked Bolton.

Discovering what makes Jupiter tick will provide scientists improved insight into weather systems on Earth, which obey the same rules of physics and also give researchers an improved idea of what’s happening in the thousands of distant alien exoplanets spotted by NASA’s Kepler telescope. “Looking at as many possible different cases in our own solar system could enable us to then apply that knowledge to extrasolar planets,” said NASA planetary scientist Amy Simon in a statement.

Humans have stared at Jupiter’s Great Red Spot since at least 1830, wondering what it was and how it came to be. Come July 11, humanity will have its best shot at understanding the greatest storm we know of, or if Jupiter continues its recent trend, perhaps we’ll just end up even more mystified.